D.W. Moffett stars as John Kennish on the hit ABC Family series Switched at Birth. The show has kicked off a new season that is better than ever. In fact, the original drama has been a ratings hit this year — with the new season scoring its most watched telecast in over 1 and a half years.

We had the chance to chat with D.W. about the current fourth season of the show, directing another episode, and the emotional storyline he feels is an important one to tell.

As the cast members start to move on to other phases of their lives this season, it seems that John and Kathryn are both doing something that they love. Her with her music and John with sports. Now that John has helped Travis discover his talent for pitching, what’s ahead for their future in baseball?

As you probably already know…our very talented showrunner, Lizzy Weiss, keeps her cards pretty close to her vest!! I know that Travis has some pretty exciting baseball stuff in his future and this rekindled passion is also going to lead John into some interesting territory.

John and Melody had some intense scenes in a recent episode. Did you enjoy filming with Marlee Matlin again?

I LOVE shooting scenes with Marlee. When I’m working with her it’s easy to understand how she won an Oscar at such a young age. She is a force of nature. Always an honor to work with her. Oh…..and she’s also maybe the nicest person on the planet. That helps too!!!

We love how protective she is over Travis but should we be a little concerned for John’s safety here?

I think we should be more concerned for D.W.!! That he doesn’t get blown off the screen by Marlee Matlin’s outrageous talent!! 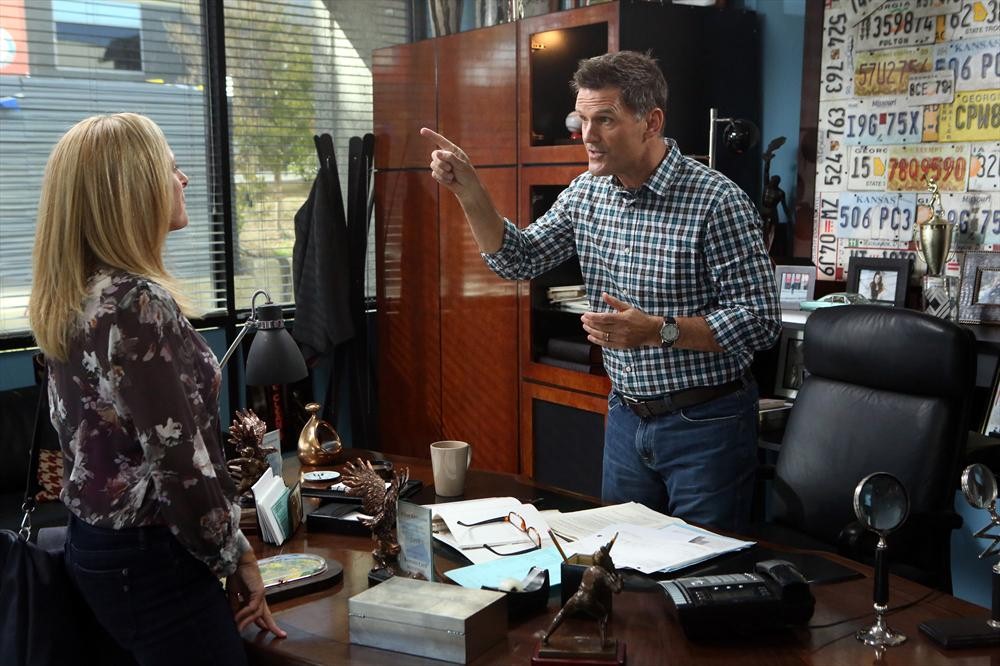 This season had a shocking cliffhanger to say the least. It kicked into motion a storyline with Bay and her family that lasts for a few episodes. Katie Leclerc mentioned to us it’s a “hard-hitting” story that will get people talking and she’s eager to see the reaction. Do you feel the same way in that it’s an important story to tell?

Absolutely. I have a 17-year-old daughter, so the issues we are addressing are very personal for me. I think Lizzy and our writers have done an amazing job. Compelling and balanced story-telling. Not easy to do…believe me!

Will you be returning to direct another episode of the series this year?

I am happy to report that I will be directing Episode 4016…that’s the 16th show of Season 4!! I hope I can do half as well as Lea did on her episode that aired last night!! (Feb 17). I think the first one went great…hoping to do an even better job this time out!!

What do you enjoy most about working behind the camera on Switched at Birth?

My background is in the theater. I directed a ton of shows in Chicago when I was starting out…and when I moved to LA…I began to concentrate mostly on acting. I really enjoy the opportunity to work with talented actors and bring their best performances to the screen. Exploring choices with them…helping them to discover something they perhaps didn’t think of…pushing them to be the best they can be.

Switched at Birth kind of tore my heart out last season. I might still be crying. Are there any happier times ahead for the Kennishes? What else can you tease about what fans and viewers can expect this season?

Oh that Lizzy Weiss! She’ll tear your heart out every time. I’m sure there will be tears for ALL this Season…but also lots of smiles and laughter. At the end of the day…this is a show about family…and heart…and soul. So buckle up…and enjoy the ride.

I want to share an anecdote with you…just to give you a sense of what this show means to me…and what this show has meant to the American TV landscape.

My family and I have been touring college campuses recently, for the aforementioned 17-year old daughter…and we were visiting Barnard College in Manhattan the other day (a wonderful institution) and a mother and daughter came up to me. They were also checking out the school, they were from Baltimore…and they asked me if I were that Dad on Switched at Birth. I was happy to say yes. Then the mother said that her daughter had started an ASL class at her high school…a hearing child had started an ASL class…because of how much Switched had meant to her…to them both. How about that. That’s the kind of TV…the kind of art…that I want to be associated with. It’s an honor. Thank the good Lord I like the people I work with too!!

We’d like to thank D.W. Moffett for taking the time to chat with us again!

You can keep up to date with D.W. by following him on twitter @DWMoffett.

Check out our previous interviews with D.W. Moffett here.

Be sure to tune in to Switched at Birth on a new night and time, Tuesdays at 9/8c on ABC Family.