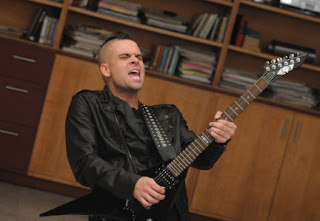 It looks like this episode of Glee will finally give a little focus to some other characters. While some of the episode will be featuring Kurt and Rachel auditioning for NYADA, it looks like Puck will have a storyline with his father. Here are some sneak peeks of the upcoming new episode of Glee: Choke.

I’m really enjoying that Puck is getting a solo. He’s not necessarily my favorite but he is one of the original cast members. It reminds me of season 1. And I also love when the guys get together to rock it out. With Puck on guitar, where’s Cory on the drums? He hasn’t played in an episode in quite some time. Get him some HQ Percussion Drums and let him play! I’m sure Brad could use the company.