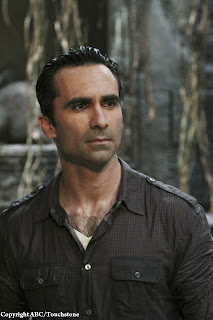 Nestor Carbonell has signed on to join ABC’s new pilot The Smart One. I have two things to say about this. 1: Yay! He’s getting work! 2: Wait, he’s already employed? Why am I not watching The Ringer? The series is set to star Portia De Rossi and has Ellen Degeneres has an executive producer. Sounds good!

The single-camera project, which counts Samantha Who? co-creator Donald Todd and De Rossi’s real-life spouse Ellen DeGeneres among its executive producers, centers on polar opposite siblings Jude (aka “The Smart One,” played by De Rossi) and Candy (“The Dumb One,” played by Akerman).

Carbonell is playing Jude’s ex, a wealthy real estate developer who has a Moonlighting-type relationship with her.

What does this mean for the Lost vet’s current role as FBI agent Machado on Ringer? I’m told Carbonell will appear in the Smart One pilot as a guest star. And while his contract with the potential new comedy does contain a series regular option, it’s in second position (see definition) to Ringer.