Sayid! It’s been so long since I’ve said that name. It’s been equally as long since we’ve all seen Naveen Andrews on our television screens. We’re happy to report that all that is about to change. Naveen has book a major role on the upcoming ABC Once Upon A Time spin-off series Once Upon A Time in Wonderland.

Who will he be playing?

END_OF_DOCUMENT_TOKEN_TO_BE_REPLACED

Hawaii Five-0 is set to stage yet another LOST reunion! And we are definitely not complaining. Jorge Garcia is poised to guest star on the CBS drama early next season. According to Ew.com, he’ll be playing a brilliant conspiracy theorist. This guest appearance will reunite him with his former LOST co-star Daniel Dae Kim. Jorge’s character is said to share scenes with Daniel. Jorge joins former co-stars Terry O’Quinn, Tania Raymonde, and Reiko Aylesworth who have all previously appeared on the show.

Josh Holloway To Star in ‘Intelligence’

It’s crazy to think how long it’s been since Lost has ended and how long it’s been since Josh Holloway has had a starring role on television. Thankfully, that’s about to change. The actor has signed on to star in the CBS pilot drama Intelligence. TVLine reports that the series is set at US Cyber Command that focuses on an agent with a special gift. Based on the unpublished book Dissident by John Dixon, Josh will be playing Gabriel Black, a former Navy Seal. Does this mean we’ll get to see him in uniform?

Mark Pellegrino to Guest Star on Person of Interest 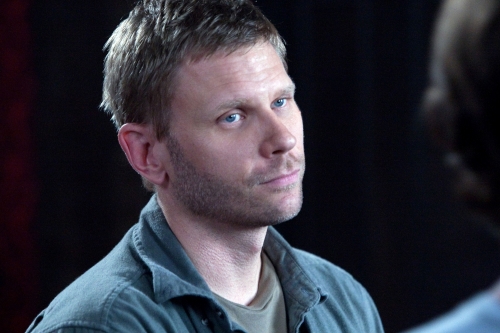 Oh. My. God. In a move that can only be described as giving the fans, or me, what they want (because, no shame, I had a huge crush on him when he was on LOST) Jonathan Nolan announced today at New York Comic Con that Mark Pellegrino will be guest starring in an upcoming episode of Person of Interest. Michael Emerson, Amy Acker, Kevin Chapman, Taraji P. Henson, and Jim Caviezel were all present at the panel today.

He’ll be playing a charming head of a publishing empire. Charming and in a suit? I am favorable. As a huge LOST fan myself, Henry Ian Cusick was one of my favorite actors to come out of the show. Since then, I made it a point to watch whatever he’s in. He’s very engaging that way. Now, fans of the actor can catch him on ABC’s new drama Scandal. See what he has to say about what drew him to the part, his dreamy accent, and his guest starring role on Fringe.

“When Lost finished, yes, [cast members] were considered a ‘hot property’ and possibly we had our choice of parts,” the actor shares with TVLine. “But the reality is it works both ways. Because we were so strongly identified with that show, a lot of people didn’t want us [for certain projects].”

Likewise, Cusick was game to change things up for himself. And in the midst of knocking around last spring’s pilot season — one year after wrapping his final scenes as Lost‘s Desmond Hume — he took a meeting with increasingly prolific producer Shonda Rhimes, whose previous creations include Grey’s Anatomy and Private Practice. “Shonda has a great reputation, and she is very successful at what she does,” Cusick notes. “And then when I heard that Kerry [Washington] might be doing it, I thought that’d be an interesting combination. So I went with Scandal.”

On ABC’s freshman drama (airing Thursdays at 10/9c), Cusick plays Stephen Finch, a legal eagle who just closed a deal to marry his girlfriend. But it is the character’s obviously shady, cad-like past that closed the deal for Cusick.

“The line that really got me was when he says to Olivia Pope [in the pilot], ‘I’m not a good man.’ That made me go, ‘Ohhhh…’ and hooked me on this character.”

But then came the not-too-simple matter of deciding if this not-good man was Scottish, like his portrayer. Looking back a year ago, Cusick recalls, “Our director was Scottish, and he kept saying to play it Scottish. But I had just played Desmond, whose accent was a lot stronger [than my own], so I toyed with the idea of playing it American.” And while the very original Scandal pilot presented Stephen as a Yankee, by the time the show hit the airwaves, “We got around to me just using my normal accent,” Cusick explains. “And I think that’s a lot more interesting.”

Despite the anecdotes shared above, Cusick re-embraced his Lost ties with a guest-starring gig on this Friday’s Fringe, playing a pivotal role in the J.J. Abrams-produced sci-fi-er’s trippy 19th episode of the season.

What we know thus far: Cusick, as well as Aussie blonde Georgina Haig, play federal agents in the year 2036. But beyond that…? “I can tell you that I do most of my scenes with Georgina and John Noble, who is a phenomenal actor, and it was a great experience,” he offers. As for the storyline, “It’s similar to Lost in that it’s high-stakes life-and-death stuff… a very exciting episode to work on.”

As reported last week, Fringe‘s Episode 19 will strongly hint at what the storyline will be for any possible Season 5. So is the door left open for Cusick and/or Haig to return? “That show is like Lost in that it can go any which way, so yes,” he confirms. “But fingers crossed, Scandal will go on for another season, and that will be that!”