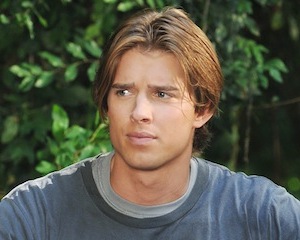 Jason DiLaurentis has long been a mystery on Pretty Little Liars. Give him a new actor and a fabulous, flowing hairdo and you get Drew Van Acker. Drew warns fans of the show that Jason will be stirring things up this season, especially for you Ezria fans out there.

Check out what Drew says is in store for Jason this season on Pretty Little Liars:

Up until recently, Jason has been a big question mark. But he’s back in a big way this Tuesday — and he’s got his smoldering sights set on Aria (played by Lucy Hale).

“Aria brings out a side in him that fans haven’t seen yet,” Van Acker previews. “He finds something in her that he can relate to, so there’s definitely a connection between them.” Which means… what we think it means? “I’m definitely stirring things up for the Aria/Ezra situation,” the actor insists.

But before Ezria fans revolt, hear the man out: “Jason is not this monster that everyone makes him out to be. He’s changed his life. In the beginning, everyone thought he was bad, and while no one knows either way just yet, you will see him opening up.” To clarify, this means he’ll be opening up to all of the girls, says Van Acker, not just everyone’s formerly pink-haired fave.

In the meantime, Van Acker tells TVLine that PLL viewers can look forward to an unveiling of “what he’s been up to in his old house,” as well as finally pinning down what exactly went wrong between Jason and his kid sis. “As the episodes go on, you’ll see more and more of their brother/sister relationship [in flashbacks], and why things became so tainted.”