Paying homage to their “Vampire Diaries” roots, tonight’s episode starts off with an excerpt from an actual diary. Elijah’s diary, to be exact, which Hayley seemed to have dug up in her quest to snoop through the Originals’ lives. It’s a semi-poetic entry from 1359 that makes a nice prelude to the episode with Elijah’s fears of his family’s dwindling mentalities in becoming vampires. Fitting, seeing as this episode focuses on the cutthroat execution of Klaus and Rebekah’s first phase of taking down Marcel and getting Elijah back. And just what is this plan, Hayley (and we) wonder? Well, the first attempt is to simply ask Marcel for Elijah back. But that’s just Plan A, little wolf. There’s always Plan B – it’s this little pill you probably should’ve taken the day after you slept with a murderous hybrid. Oh…sorry. I meant, war.

END_OF_DOCUMENT_TOKEN_TO_BE_REPLACED

[Due to the football takeover of Pix 11, this episode didn’t air in the NJ/NY area until tonight, hence the late recap.]

For those who weren’t paying attention to the final scene of last week’s episode, don’t worry! Bonnie is here to recount the murder of her father by Silas to you, and Jeremy. She explains how he told the entirety of the Town Square to forget watching him kill her dad and focus on finding Katherine. And, while they continue fighting their heart wrenching battle with not being able to touch each other, one thing is clear – don’t give Silas what he wants. And what he wants is Katherine.

END_OF_DOCUMENT_TOKEN_TO_BE_REPLACED

Season five of “The Vampire Diaries” premieres with a few new characters, a few new plot twists, and just the right amount of blood. This is a vampire show, after all!

END_OF_DOCUMENT_TOKEN_TO_BE_REPLACED 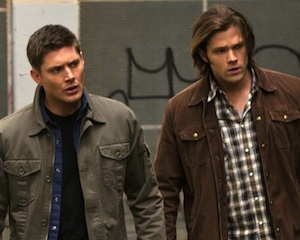 Good news for CW fans! The network has announced that they have renewed 90210, Supernatural, and The Vampire Diaries.A decision has not yet been made for other shows on the network such as The Ringer or Gossip Girl.

The CW has made its first scripted pick-ups for the 2012-13 TV season, granting early renewals to Supernatural, The Vampire Diaries and 90210.
The Vampire Diaries will head into its fourth season, 90210 will return for its fifth and Supernatural will be entering its eighth.
Still awaiting official word on their fates at The CW are Gossip Girl, Nikita, The Secret Circle, Ringer and Hart of Dixie.