As usual super-heroes and blockbusters rock our summers. This year you can choose between Star Trek, Man of Steel, Pacific Rim, World War Z, The Wolverine or you can decide to spend your summer with one of the funniest guys of our time: Steve Carell.

END_OF_DOCUMENT_TOKEN_TO_BE_REPLACED

Chris O’Dowd Drinks a Fly on The Graham Norton Show

Yikes. File this under things that aren’t exactly appetizing. While filming an appearance on The Graham Norton Show, Chris O’Dowd got a little more than he bargained for when he went to take a sip of his drink. Appearing alongside Steve Carell and Kristen Wiig, a massive fly invades the studio. Little does Chris know, the fly took up camp inside his drink. What follows is both kind of gross and pretty hilarious.

Ron Burgundy is back! The official trailer for Anchorman 2: The Legend Continues has hit the internet. With a star studded cast that includes appearances by Will Ferrell, Vince Vaughn, Paul Rudd, Steve Carell, Christina Applegate, Kristen Wiig, John C. Reilly, and more, this movie looks to be one you won’t want to miss.

Anchorman 2: The Legend Continues is slated to hit theaters this Christmas.

View the full trailer for the movie here:

END_OF_DOCUMENT_TOKEN_TO_BE_REPLACED 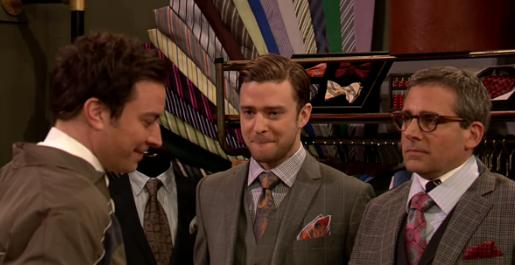 In case you weren’t aware, Justin Timberlake has been a featured guest on Late Night With Jimmy Fallon all week. So far no Barry Gibb Talk Show but we’ve been getting some great musical performances from JT’s new album and some hilarious sketches. This one in particular has been my favorite so far of the week. It stars Justin, Jimmy Fallon, and Steve Carell helping Jimmy pick out a suit and tie at the local suit shop “Lumberpond.” Get it?

Check out the video here and be sure to tune in to Jimmy’s show this week!