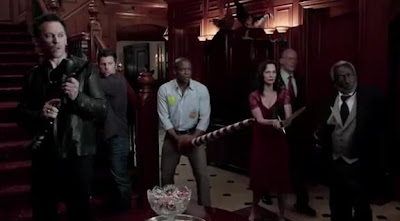 Psych celebrates its 100th episode this Wednesday! The gang is in for a night of murder, mystery, and surprise endings chosen by the fans on each coast. Shawn will have his work cut out for him to help him “get a clue” when Christopher Lloyd, Martin Mull, Lesley Ann Warren, and Garrett Morris guest star. It’s a shame Tim Curry has already been in another episode. He would have been fun in this one as well.

The 99 Psychs on a Wall marathon starts tonight at 7pm ET on The Cloo Network. The first 99 episodes of Psych will air leading up the episode 100 on Wednesday, March 27th on USA.

Check out these clips and sneak peeks of the episode:
We will update as more sneak peeks are released so keep checking back!

Next week, Shawn and Gus are heading south of the border. Jeffrey Tambor guest stars when Shawn and Gus try to save Henry when he’s…kidnapped? He can’t catch a break.Also, Juliet and Shawn throw a housewarming party. Gotta love Lassie’s gift.

The episode airs tonight so be sure to check it out.

Check out these sneak peeks of the episode “No Country For Two Old Men” here…featuring the return of Shawn’s visions!:

Psych is about to hit a huge milestone. The hit USA Network comedy is about to reach it’s 100th episode. Airing on March 27th, fans will have a say in how the episode ends..in real time! The network is asking for fans to vote on an ending during the episode. Fans will able to vote for the suspects on the official website or through Twitter. The episode titled “100 Clues” guest stars Christopher Lloyd, Lesley Ann Warren, and Martin Mull. Tears for Fears’ Curt Smith and Garrett Morris will also guest star.

If that wasn’t cool enough, Cloo Network is planning a huge marathon. The “99 Psychs on a Wall” marathon will begin Saturday, March 23rd at 7pm and will feature every episode leading up to the 100th.

I’m already stocking up on some snacks.

In “100 Clues,” Shawn (James Roday) and Gus (Dule Hill) are invited to a mysterious party at a historic Santa Barbara mansion by Billy Lipps, a rock star whom Shawn and the Santa Barbara Police Department sent to prison five years earlier for murder. When a deadly crime is committed, five suspects emerge: the Butler, the Groupie, the Manager, the Author and the Host. Christopher Lloyd, Lesley Ann Warren and Martin Mull co-star, with Tears For Fears’ Curt Smith and Garrett Morris. 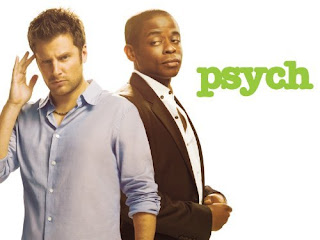 I loved last night’s new episode of Psych. While I miss the sound that alerts us when Shawn observes a clue, I loved the Blair Witch Project feel while the gang tried to survive a trip into the woods. And The Big Show guest starred!

Next week, they’re heading south of the border. Jeffrey Tambor guest stars when Shawn and Gus try to save Henry when he’s…kidnapped? He can’t catch a break.

Check out the promo of the episode “No Country For Two Old Men” here: 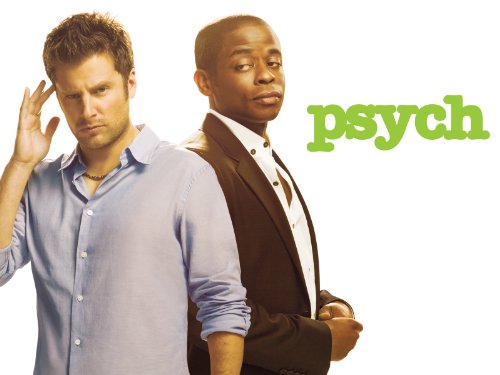 I love Psych. I wish it got more recognition for the hilarious, awesome show that it is. The fact that season 7 will probably be the last one makes me so sad. It’s very rare that a show gets me to actually and literally laugh out loud these days. But Psych is one of them. If you haven’t already, check it out sometime. New episodes of Psych air on Wednesdays on USA.

Here’s the promo for next week’s new episode “Lassie Jerky.”