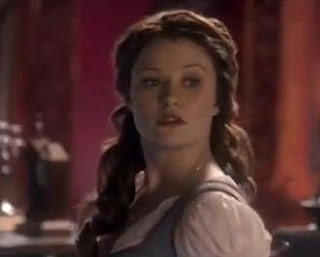 There aren’t enough words for me to explain how excited I am for the new episode of Once Upon A Time. Skin Deep will be focusing on the tale of Beauty and the Beast and features LOST’s Emilie de Ravin as Belle. Or in this case, Beauty? Here are some sneak peeks of the episode (airing Sunday on ABC) where you can see the debut of Rumply as the Beast. He’s spinning on his wheel! Emilie needs to work on her accent though. I wasn’t aware Belle was Australian.

The good news? Once Upon A Time will be taking on the classic tale of Beauty and the Beast. The bad news? We have to wait to see the epic episode until the show returns on February 12th. LOST’s Emilie de Ravin will be guest starring as Belle. As for the Beast? Look and see: 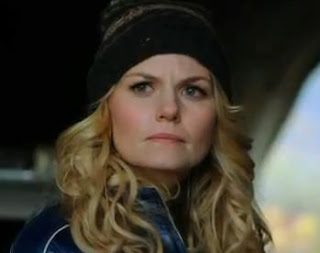 Is someone else finally ready to stand up to Regina? On tonight’s Once Upon A Time, one of Regina’s loyal followers has had enough of her dictatorship. Find out who in these great sneak peeks of tonight’s episode: Fruit of the Poisonous Tree. 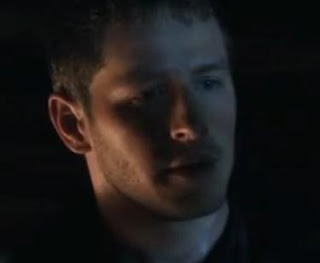 David and Mary are still struggling with their feelings for each other. Neither wants to admit it to the other but their love is eternal. Mary goes to the diner at 7:15 every morning no matter what because she knows that David is always there at that time. Little does she know, that’s the only reason he goes there. Unfortunately for her, her hopes just got shoved way back down to the ground. While in the store shopping for jumbo Apollo bars, she bumps into David’s wife and her new pregnancy test.

Snow is trying to forget Charming in Fairy Tale world as well. She goes to Rumply for a potion to cure her heartbreak. In return, he asks for a piece of her hair. Hmm. What is he up to with that? Charming’s evil father is forcing him to forget about Snow and put on a happy face and marry for the good of his kingdom. I’ve always hated you Charles Widmore. Charming sends Snow a letter telling her to come see him before the wedding if she still cares about him. She races over but is caught by the King’s guards and thrown in a cell with Grumpy.

In Storybrooke, Mary finds a pigeon separated from his flock. She makes it her mission to return it to its friends so he’s not lonely for the rest of his life. She refuses any help from David and ends up caught in a rainstorm dangling off the edge of a cliff. David is there to save the day and pulls her to safety. They dry off in an empty cabin and both confess they still have feelings for each other. But David is married so it’s tough noogies. Then Mary lets slip that she saw his wife with a pregnancy test. Oops. David learns that his wife isn’t pregnant and Mary and David kiss. Yay! Get a divorce already will you?

Stealthy, the 8th dwarf, appears to let Grumpy and Snow out of their cells so they can run to freedom. Stealthy is killed and Snow sacrifices herself for Grumpy. The King threatens to kill Charming if Snow doesn’t go and break his heart. She does as she’s told and leaves to go live with the 7 remaining dwarfs. Grumpy refuses to let her take the potion to rid her of her pain. When Charming calls off his wedding, Grumpy goes to tell Snow of the news only to discover she had taken the potion anyway.

Regina is disturbed when she doesn’t recognize the mysterious new stranger that has come to town and is even more disturbed when she sees him talking to Henry. She demands that Emma look into him for her. Emma discovers that he’s a big, bad, writer. And his mystery box is filled with nothing but a typewriter. Who is he? Did he write Henry’s book?