Pretty Little Liars returned tonight as ABC Family morphed into Freeform. Every PLL fanatic took to Twitter to express their excitement for the season premiere as the episode launched the series 5 years forward. If you missed the episode, or, like me, just hate yourself because you just can’t quit this show, this recap is for you.

Read on for our Pretty Little Liars 6×11 “Of Late I Think Of Rosewood” recap:

Because the episode takes place 5 years following the events I can’t even remember from the finale once A was revealed to be CeCe Drake a.k.a. Charles Dilaurentis, I felt it would be easier to just give an update on what our favorite characters have been up to.

Aria is a book editor in Boston. She has finally moved on from Ezra and his creeper eyes and is dating someone new called Liam. Her hair is still on point. Ezra is dealing with the death of his friend during his trip overseas. He did manage, however, to write his book.

Spencer is, as expected, taking over the world in a political sense over in Washington, D.C., and her mom is running for Senate. Her Silver Fox dad did not appear in the episode, but Toby did! He’s still a cop and he’s building a house for someone. Poor Spencer only got a chair, but it’s OK, because she’s single. And she has bangs now. And, incredibly… mysterious chemistry with… Caleb?!

Hanna is in New York taking over the fashion world and traveling the real world. She’s got a giant rock on her finger and some kick-ass extensions. Sadly, that rock is not from the money Caleb is probably making hacking into things. She’s dating some guy named Jordan and staying in ritzy hotel rooms… thanks to her mom! Ashley has taken on the project of transforming Radley Sanitarium into a lavish hotel with cocktails and brunch.

Poor Emily has had the only believable time dealing with the traumatic events that led up to Pretty Little Liars 6×11. I mean, really, am I supposed to believe all these 23-year-olds are employed?? They should be broke and living in a cardboard box with like, 17 roommates. College wasn’t for Emily and she is bartending farrrrrrrr away from Rosewood following the death of her father. She’s hiding how hard it’s really been from her friends.

Alison is a teacher in Rosewood — because apparently a teacher is as easy a job to get in this town as a cop. 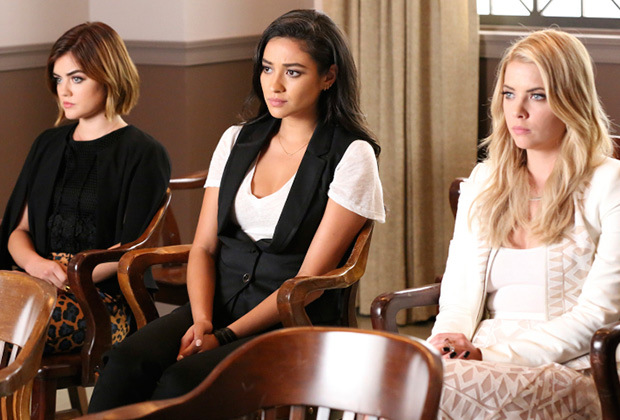 Alison is very focused on keeping her family together, and Charlotte is now a member of that family. A judge wants to hear from the girls on whether or not they’re afraid of Charlotte, as this will ultimately decide whether she is let out of prison. Alison begs the girls to return home to give a statement. Only Aria is unable to lie for her and tells the truth about her fear.

But none of that matters now because DUN DUN DUN: Charlotte is dead.

Two minutes after Charlotte is released, her body is found at the bottom of the bell tower. And we didn’t even get a creepy scene of her drinking milk.

Sara Harvey and her Miley Cyrus ‘do show up at the funeral like she’s the New Jenna and Mona is pisssssssed. I don’t know why I thought Sara was dead but here we are.

Everyone believes she committed suicide for about 30 seconds before the deja vu starts. A cop tells the girls to stay in town because this is a MURDER. And they all wake up hungover. It’s just like the pilot! THIS IS ALL STARTING ALL OVER AGAIN SOMEONE SAVE ME FROM MYSELF AND MY DVR.

What did you guys think of the Pretty Little Liars 6×11 premiere? Will we finally get the serial killer Ezra we all deserve? Post your thoughts below, and check out the preview of next week’s episode.