Nils Hognestad is a charming and talented up and coming actor making a name for himself both in front of and behind the camera. He recently became a fan favorite on ABC’s Once Upon A Time. He played the role of Franz, his breakout, recurring role on the series. He is now currently a regular on YTV’s Some Assembly Required. The number one ranked show requires him to tape in front of a live audience in Vancouver.

We had the opportunity to chat with Nils about his time on Once Upon A Time, his new YTV series, and his upcoming film “My Sister’s Kids: My Gold Rush Adventure“.

Read on for our exclusive interview with Nils Hognestad below:

​To start off, can you talk a little about how you got into acting and entertainment? Has anyone influenced or inspired you as an actor?

Apparently I’ve always wanted to be an actor. I was speaking with some aunts of mine from Norway who asked me when I was young what I wanted to be when I grew up, and I said that I wanted to be a face on TV. So, this is apparently something I’ve always needed to do. The first instance I can remember truly wanting to become an actor was when I was living in London, and my parents had taken the family to go see ‘Cats’ in the West End. I was completely hooked. A week or two later we moved to Vancouver, and within the year I already had an agent and was taking acting classes at the age of 10. I can’t say any one person has inspired me as an actor. I find moments where I find myself taking mental notes from every actor from Hilary Duff to Sir Ian McKellan.

As your resume continues to grow, is there anyone you would love to work with someday, if you could pick anyone?

Of course! I have a long hit list of people I want to work with. I would love to be directed by Tim Burton. His dark aesthetic definitely appeals to my morbid Norwegian sentiments. As directors, Ron Howard and Steven Spielberg always have their names attached to quality projects. I love Lars Von Trier‘s experimental nature and would adore to be involved with something like that. I’m also still waiting on my phone call to play Brad Pitt‘s son. 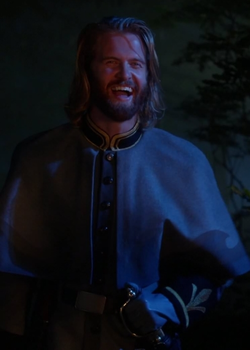 I was familiar with Once Upon A Time prior to being on the show, so it was great to join the pre-established cast and feel welcome into that family. Now, I really hate that you ask this question, because, full disclosure here, I’m a bit of a closeted Frozen fan… I could probably sing the entire album from beginning to end. Maybe it’s the Nordic-ness of the film I relate to, or maybe it’s the amazing music, animation, or storyline; but nevertheless, I’m a fan, so to be apart of the cast and to wear these incredible costumes I recognized from the film was a very secret fantasy of mine…

With such a high profile role, how has the fan support been so far?

The fan support has been almost overwhelming. It’s shocking how many signed head shots I’ve had to send all over the world since appearing on the show. But, everyone has been very positive, supportive, and encouraging the entire time. I was concerned the exact opposite would be the case, considering the fan followings for both Once Upon A Time and Frozen are so strong. But, the response has only been positive!

In your latest role on YTV’s Some Assembly Required, you film in front of a live audience. How does that differ for you? Are there any challenges that come with that or do you enjoy the change?

Working in front of a live studio audience is just brilliant! Some people excel under the pressure, and some collapse, so casting a show like Some Assembly Required is probably the greater challenge. I have my MFA in classical performance. Being in front of an audience is very exciting for me. To be able to combine what I love about theatre with what I love about on camera work is a dream come true. It’s exciting and stressful all at once. You have line changes being thrown at you constantly, continuity corrections to keep in mind, directorial notes, while trying to remain engaged and honest in the scene, and to top it off, an audience and a crew of people that become an extra scene partner that you never truly can know what they’ll do. It’s a lot to keep in mind, so when you get it right, it is such a rush. 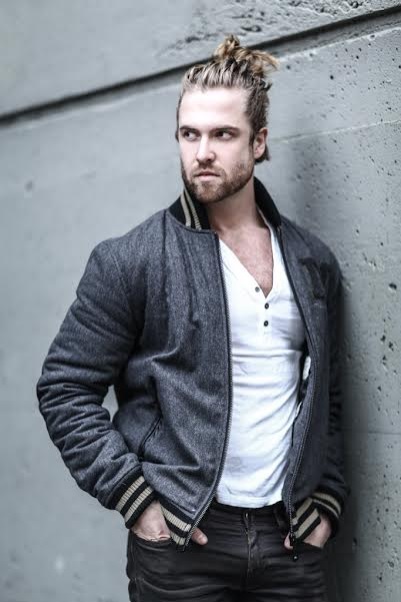 You have experience with directing as well. Is that something you want to continue to pursue in the future?

You know, it’s never been something that I absolutely HAD to do. I enjoy directing, but my want is just to be in the scene, performing it myself. I don’t doubt that directing is something I’ll do more of in the future, and that will be a whole new set of skills that I can develop, but the direction I really want to go in the future is towards producing.

You can also be seen as part of a very successful film franchise in Denmark. What attracted you to the film “My Sister’s Kids: My Gold Rush Adventure”?

There was so much that appealed to me about My Sisters Kids. I didn’t know how big of a franchise it was before I signed on to the project, so it wasn’t the fan following that appealed, but more the fact that my Mormor (mom’s mom in Norwegian) could finally see me in a film that didn’t involve me getting eaten alive, murdered, or naked with a lady. Also, as an actor, my favourite roles are accented ones. I love working vocally through a character- and this was probably the greatest vocal challenge yet. You see, I don’t speak Danish, yet, the entire film was in Danish. Now, I speak Norwegian, and on paper the languages look very similar, but they are worlds apart when you hear them spoken. This was hands down the greatest acting challenge I’ve had to date, but I believe I excelled with that great challenge.

Do you enjoy filming all these different genres and projects? Are there any you prefer over the others?

I adore working on different genres and projects. I’m someone who thrives on change and gets depressed with monotony. So, I hope that my future is only filled with vast variances in genres and projects. I can’t say I like one more than the other, they all offer new and exciting challenges.

Finally, is there anything else you’re working on? What can your fans expect from you next?

Currently I have more episodes of Some Assembly Required being released, I’m working on one of my own scripts, and there is something coming soon that I’m quite looking forward to, but cannot reveal quite yet. I’ll just have to keep you guessing…;)

We’d like to thank Nils Hognestad for taking the time to talk with us. We appreciate the great interview!

Be sure to keep up to date with Nils by following him on Twitter: @___AndTheNils

Tags: Nils HognestadOnce Upon A Time
No Comments
Share
0