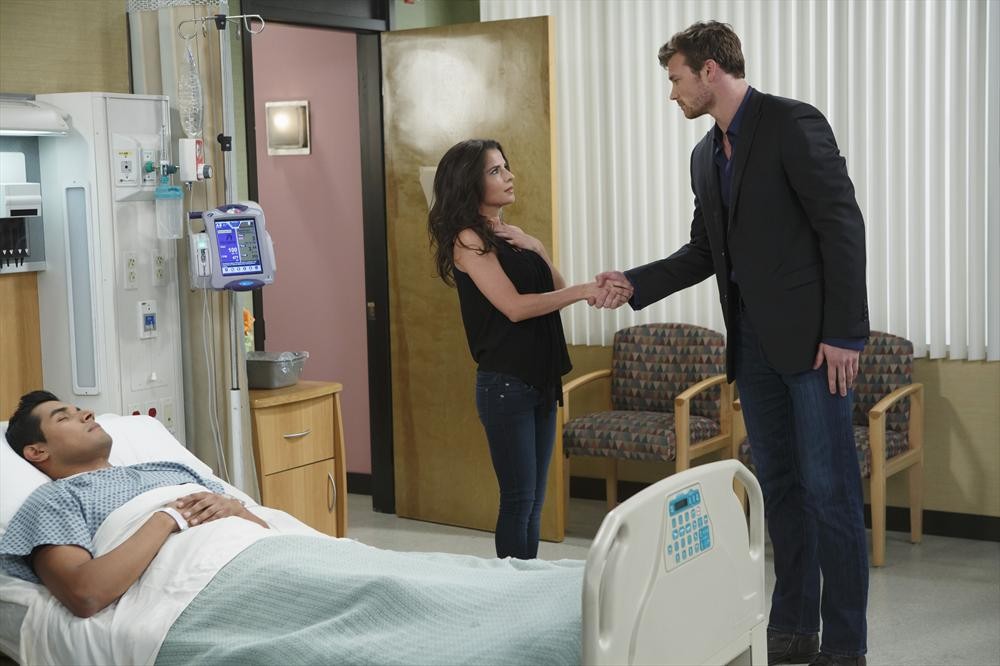 We had the chance to talk with Derek Theler and Kelly Monaco about what fans can expect from the upcoming crossover.

Check out our exclusive interview with the duo below:

This upcoming crossover episode, can you guys talk about the decision to blend the shows and work together? How did that come to be?

Kelly Monaco: Yeah, we got Derek and Melissa to come over to General Hospital.

Derek Theler: It’s exciting. It’s fun stuff. We had a blast on General Hospital after Kelly worked with us a couple weeks later. It’s fun. We were basically kind of playing ourselves.

Kelly: An exaggerated version of myself, yeah. It’s not that different, I think.

Were either of you a fan of General Hospital or Baby Daddy before the crossover took place?

Kelly: I loved the show, yes.

Derek: I could say the same. I definitely knew the show. I had a blast with it. It was really exciting to come and be a part of it.

Kelly, you mentioned before that your character on Baby Daddy is kind of an exaggerated version of yourself. Can you talk a little about that? Was that fun to play?

Kelly: Yeah, I play my character Sam and I play myself. But it’s a comedy so we did a heightened version of what people would expect a soap star to be. So I played a really bad actress and a really bitchy person. So, it was fun to kind of do that.

Derek, what did you enjoy most about your crossover role? Is it a big departure from Danny?

Derek: Yeah. Danny in my show is not the brightest crayon in the box. He’s a little bit slower. Coming to General Hospital I could play a doctor and a normal human being who understands stuff. It was fun, I play the chief of plastics in the hospital and one of Greg’s colleagues. It was great experience. I got to work two days on set. It’s always fun to go to a different set and see what it’s like. I had a great time.

What would you both say you’re both looking forward to the viewers seeing from the episodes?

Kelly: I would say the crossover. Just to get a glimpse what Derek is doing on General Hospital, with Derek and Melissa both coming over. Just for them to get a glimpse at their favorite characters maybe doing something a little different.

Derek: Kelly did a great job on our show. Our director for almost every one of our episodes plays Kelly’s director from General Hospital. Michael Lembeck. I’m really excited for people to see that. He’s a huge integral part of our show.