Interview: Italia Ricci on ‘Chasing Life’ 1B & the fate of that blonde wig from the Christmas episode – Exclusive

Season 1B of Chasing Life premieres on Monday, so we caught up with Italia Ricci to get the scoop on that Leo cliffhanger from the Christmas episode, as well as what to expect with regard to April and Dominic’s relationship, Sara and George’s blossoming romance, and, of course, April’s recovery.

Check out our full interview with Italia Ricci below!

When we last caught up with you before the Christmas episode, you said the second half of the season would explore the other characters’ lives more deeply. How does the show go about balancing April’s life, which is obviously the main focus, with that deeper exploration of the secondary characters?

You get to see what their lives are like independent of April. April’s going through her stuff and a lot of the first half of the season has been seeing how April’s life is enhanced by all of these characters and how they help or hinder her story, but this time you’re getting just their stories. It’s not only how they’re involved with April. I know there was some of that with Brenna and a little bit with Mom because of Dad’s affair, but now you you’re gonna get to meet Natalie’s mom and you’re gonna get to see what Beth is like and what’s going on with her completely separate of April, and then Dominic, and Grandma starts dating, so you get to see a lot more of that and it becomes a little bit more of an ensemble, which I think is a lot more fun because I think the audience will start feeling more like part of the family.

The previews for 1B are very dramatic and they show that April has some tough times ahead but also some fun times ahead. Can you give us some teasers about what’s up with her?

Well, she’s just trying to get back to normal; she wants things to just be the way they were before she was diagnosed. She’s very much a go-getter and just wants to get right back into it, so the struggles that she has are [that] physically, her body doesn’t work the same way that it used to because of chemo, and her brain – she can’t remember things, she’s got “chemo brain.” She can’t move as quickly because physically she’s a lot weaker because of the medicine, so you see her having to struggle with that, where she feels she wants to be the April she was before and she physically can’t do that. And then psychologically, she’s scared of relapse – what if it comes back? So you see a lot of the paranoia there and how that affects her decisions and how that stresses the relationships around her, so that’s definitely something that the audience will get to experience.

The end of the first half of the season was a Leo cliffhanger, and then we saw that resolved with the voicemail in the Christmas episode. Then there was another Leo cliffhanger, because you apparently hate us.

It’s not my fault! I read the scripts and I get mad too! 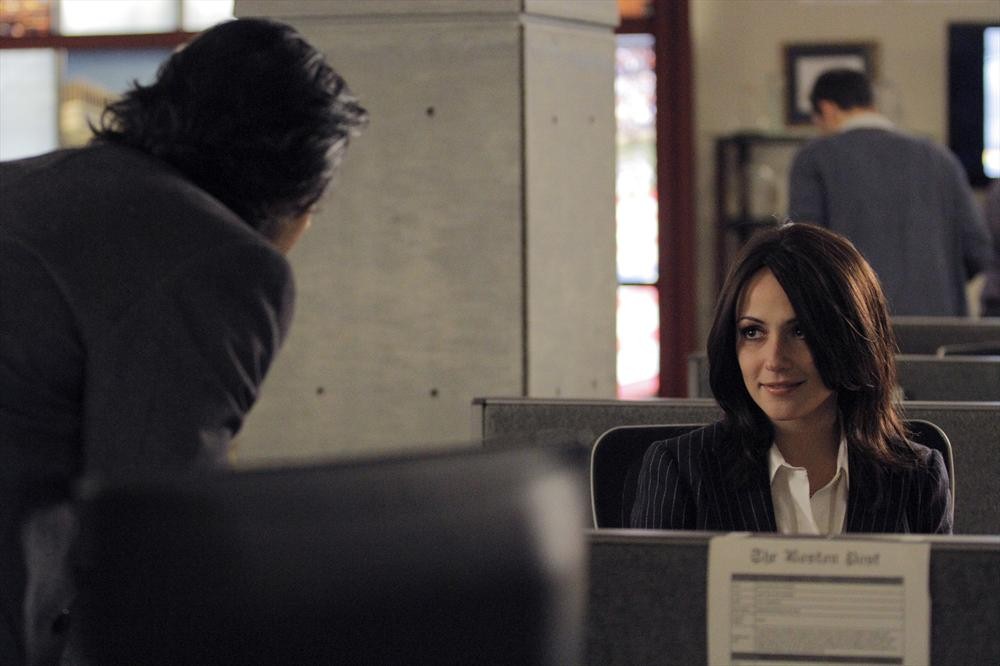 So presumably that will have some kind of resolution in the premiere episode on Monday – will we find out what happens with him?

Yep. You’re gonna meet some new people and you’re going to have to say goodbye to people that you’ve gotten to know. I’m sorry, don’t hate me!

We saw Dominic disappear toward the end of 1A, and then he came back. Are we going to continue to see him working side by side with April? Is there going to be further weirdness with them, and how is their relationship going to develop post-everything that happened?

He’s obviously still very hurt. There was a scene that ABC Family posted – a sneak peek of the episode on Monday where you see April is trying to maintain at the very least a professional relationship with him and he is resisting that so strongly, and so you see in that scene where she’s just like “Can’t we just call a truce? I’m sorry.” He’s not ready for it – he says no. She broke his heart and now he’s the jerk that broke up with the girl with cancer, so he’s dealing with that and deciding what matters to him and if he still wants to be with her or not, and she’s figuring that out too. She doesn’t know if she make a huge mistake and if she wants to fight to get him back, so you guys will get to see her dealing with that and meanwhile having to be around him because of work. That is hard, and they have moments where they think “Screw it, let’s just try again, let’s fix it,” and there’s moments where it’s just like, “I want to rip your eyeballs out.” But decisions are made and I’m interested to see what the audience thinks, whether they’re good ones or bad ones.

When we began the season, April’s father was out of their lives in the sense that he wasn’t physically present anymore, but his memory does seem to have quite a big presence within the family – and then, of course, April had that hallucination of him. Does that presence continue in 1B and how does it affect everything that goes on, especially with Sara and George’s blossoming romance?

Dad’s a huge driving force in the story. Dad is sort of the center of all the drama that isn’t involved with cancer. The relationship with Sara and George, of course he’s present there because he was there, and you see how that affects Sara in the decisions that she makes with George, if she’s got to get over Dad and make it work or if he’s still too much of a presence for that to happen, so you’ll see them address that. Then, when you think he’s going to go away, you meet Natalie’s mom and then, boom, there’s Dad’s presence again, so you see Sara having to deal with that, and Brenna and April, how they react to meeting the woman who had an affair with their dad. It’s a very, very tense first couple of scenes.

It sounds like there’s going to be a lot going on.

April had chemo, so she had the different stages of haircuts in the Christmas episode, and then we see her with short hair in 1B. Did you actually cut your hair?

I offered to shave my head for April on camera, but we were shooting out of order so they needed my hair back in some scenes. When we go to Boston, we’re shooting scenes from like four episodes prior or whatever, so I couldn’t, which really kind of bummed me out. But we have amazing wigs, so all of those lengths of hair that you’re gonna see as it’s growing back for April are all different wigs. And they’re fantastic. At the end of the day, I would take [a wig] off and I’d be like, “No, I like it better!”

Oh, I took that blonde one from the Christmas episode home. I have that one. I don’t know when I’ll ever wear it or need to, but I have it just in case.

Season 1B of Chasing Life premieres Monday, Jan. 19, at 9/8c on ABC Family. Check out the official preview below and keep up with Italia Ricci on Twitter and Instagram!