This weeks The Originals starts off with a toast, celebrating the victorious unification of the city back in 1919. Wolves, witches and vampires are cohabiting peacefully. And it’s all thanks to Klaus.

With Klaus tethered to the bed by the agony of the Tunde blade embedded into him, Elijah uses his free time to call Cami for backup, which – let’s face it – isn’t the best choice, but hey. Apparently Klaus has some semblance of respect for her and her blood is laced with vervain so she’ll do just fine to keep an eye on him as he heals while Elijah takes care of other business.

In the mean time, Hayley’s managed to keep Celeste on a leash. She puts on a debatable display of authority, casually wielding a shotgun like so many pregnant werewolves do, and demands the witch lift the curse from her people.

Klaus: “The line between what brings us pain and what sustains us is far thinner than imagined.”

Cami endures feeding Klaus her blood while begging the question, how could he want to kill his sister, which he answers by flashing back to 1919 where he finally gave his blessing to Marcel and Rebekah. See? There’s a heart in there. Only it was too late, as Marcel and Rebekah had already summoned Mikael to town. He tells Cami Rebekah has done the one thing no one else has ever been able – “ripped my heart out.”

Rebekah and Marcel are on their way out but Marcel doesn’t want to leave without Davina, especially when they can use her to put a cloaking spell on them! Yeah…about that? How many witches was Katherine in cohorts with over the centuries on The Vampire Diaries and not one of them knew this spell to cloak her from Klaus? I don’t know about you guys, but I’m never a fan of convenient plot devices that don’t correlate with backstory. Anyway, the pair turn back for the fallen witch with a plot to take down Bastiana, Genevieve and Celeste so they might revive Davina. They enlist Thierry for help, “one stray dog to another”, and he becomes their bait for the witches. 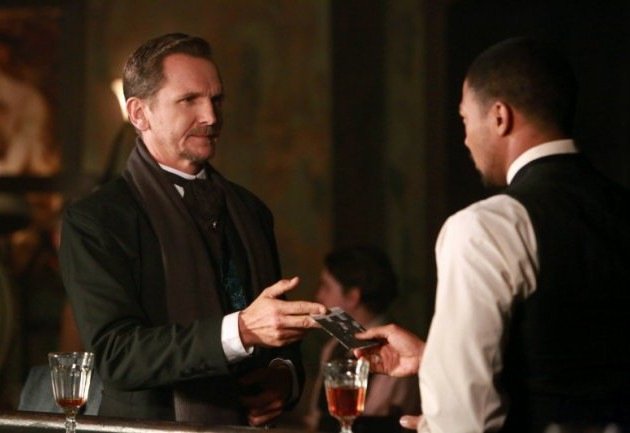 Elijah,on the other hand, is on a mission to find Celeste and Hayley. He seeks the help of Monique, offering her a wager. Knowing that Celeste will just body jump once she’s done with her revenge and leave the witches of NOLA powerless, he tells her if Sabine truly has the “faith”, the power should return to the earth, but if she’s lied, then she’ll just body jump again. But this time, he’ll control where, so long as Monique locates her.

Out in the Bayou, Hayley receives an herbal remedy from Celeste for her family’s wolfy problem. When she’s skeptical of Celeste’s haste, Celeste explains how she relates to her and her enamor with Elijah. She calls it a chance to free herself from the Originals. Cue Elijah showing up to rain on the parade. But Hayley’s not about to let him kill her when she’s not sure the elixir will work yet. Though she gives him an ultimatum, he takes matter into his own hands and snatches Celeste (and the cure) and runs off with inhuman speed. When he has the witch cornered, he demands the truth about the elixir and her endgame. But her game is already won. The Mikaelson family is falling apart, and in regards to Hayely, Elijah is, the elixir is Celeste’s own little revenge on him. He’s, yet again, faced with a choice – give the elixir to Hayley and lose her to her wolf pack OR keep the elixir from her and kill Celeste and become the sole object of her hatred. Basically, it’s a catch-22. He chooses giving her the elixir and a parting kiss on the forehead, preemptively sealing his fate. If she wants to run off with the wolves, good riddance I say!

Theirry gets two of the three witches (Bastiana and Genevieve) to meet with him under the false guise of inside information of their demise. In fact, he tells them Rebekah and Marcel’s plan and it leads to Bastiana’s beheading by Marcel, but Genevieve manages to escape. Still, Marcel refuses to leave without Davina. Meanwhile, Cami is still trying to wrangle the grumpy Klaus as he flashes back to a memory of Mikael trying to convince Elijah to help him kill Klaus. But Elijah refuses, never willing to go against his own brother. It’s the introduction of a weapon that most The Vampire Diaries fans already know well, and it happens to kill Originals – a white oak stake. When story time is over, Klaus retrieves his own special indestructible white oak stake from hiding and heads out to take down Rebekah.

Cami tries to appeal to his sense of reason and the “good” she sees in him – wait. What good? What good has he done for you besides compel you to leave town, Cami? Well anyway, she beseeches him not to become his father which provokes him to prove just what a monster his father really was in contrast. He takes her to the opera house where Mikael finally found him at the opera in 1919…

Mikael: “Father? Still clinging to that word after all these years? A bastard, desperate for a daddy. I wonder if your real father would be as embarrassed as I was of you, before I discovered you were not mine? Most likely. Easy now, boy. Don’t worry. Death will come. But we need to have a little chat before you shuffle off your immortal coil.”

Klaus: “Ay words we have for each other have been spoken long ago. But know this – I am no longer the animal begging fro scraps of your affection. I will die knowing my hatred of you was just. I will fall proud of all I have achieved her. So. Mikael. If you are going to kill me, then get on with it.”

Mikael: “Au contraire, Niklaus. Some things remain unsaid. For instance, you were right to be proud of your achievements here. As I walked the streets your name was spoken of in reverent tones by the city’s finest. So after I kill you, I will remain here in New Orleans until every last person who remembers you is dead. The deeds of the mighty Klaus will be remembered by no one. And you, boy, will simply never have existed.”

Ouch. I mean, ‘daddy issues’ is kind of an understatement for this one. And as if that weren’t enough, the opera curtains rose to show a crucified Marcel, along with several of the corpses of New Orleans’ supernatural dynasty. The audience was compelled by Mikael to watch as if it were a terrific night while Klaus attempted to save Marcel, along with Rebekah, but their efforts against Mikael were futile. Elijah showed up, begging them to run and as they fled, Mikael burnt it all to the ground, with it, they assumed Marcel. The entire city was destroyed, along with the last shred of humanity Klaus had retained. He assures her he is not going to be torturous like his father was, and simply end Marcel and Rebekah quickly.

Back at the cemetary slash witch sanctuary, Elijah has taken Celeste back where she’s trapped him by putting up a shield for 24 hours that keeps only Originals in. When all is said and done, she offs herself with the intent to body jump again. But Monique has heard her confession and lost the wager, so her end of the bargain upholds and Celeste is revived back in her own body where Elijah kills her once and for all so she may never return. At the same time, Marcel and Rebekah have retrieved Davina but Rebekah is stuck behind the shield and makes him leave to take Davina somewhere safe. She comes across Elijah where they have minutes, at most, to understand what’s about to happen before Klaus waltzes in shouting her name in vengeance. At the moment of confrontation, the three totally vamp out for what’s likely to become a show down of epic proportions! Oh. By the way, Davina is alive again.

So will the “always and forever” pact finally cease? Watch The Originals next week to find out!