Here we go, Irrelevants! Season 3 of Person of Interest is finally here. We pick up where season 2 left off. The Machine may be “missing” with its whereabouts unknown, but that hasn’t stopped it from churning out numbers left and right. Finch and our gang are still doing what they do best, only now, it includes the help of new series regular (Sarah Shahi) as Shaw.

Check out our season premiere recap of Person of Interest 3×01 “Liberty.”

Shaw can still kick some major ass but she doesn’t play well with others. This presents a bit of a problem for Finch (Michael Emerson), who has trouble controlling her. I did, however, enjoy seeing Fusco (Kevin Chapman) in a very Amish looking beard.
Carter (Taraji P. Henson) has been demoted from detective to a regular patrol officer. Not so great for her career but fab news for her wardrobe. I am loving seeing her in regular clothes. John Reese agrees. “You look kinda badass in that uniform.” Is it just me or is Jim Caviezel looking better than ever this season?
Root, poor Root, is still stuck in a mental hospital. She’s having regular “conversations” with The Machine and her doctor isn’t happy about it. He sentences her to solitary confinement and restricts her access to anything electronic. Perhaps my favorite scene of the night includes Root getting her “revenge” on her doctor by whipping out all the statistics the Machine gave her including his taste for “massage parlors.”

Root then reveals that the reason she’s arguing with the Machine is because she can’t decide whether or not she should kill him. Whoa. Chills. What side is the Machine on? 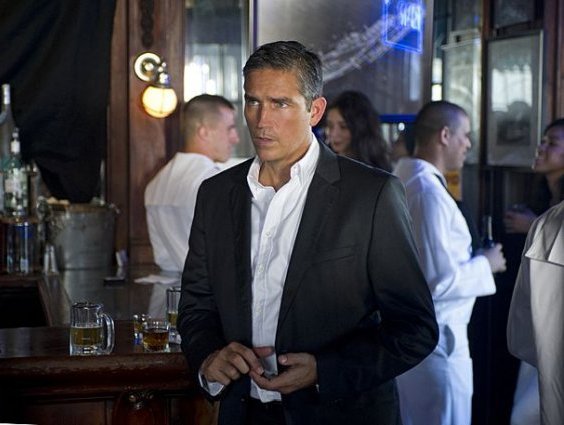 The latest number happens to be a Naval officer. He’s harder to find than usual because this episode chronicles one of the best holidays in New York City: Fleet Week. It quickly becomes apparent that Mr. Salazar is not the bad guy here. But he has a bad influence of a friend named RJ who lands him in a heap of trouble.
A group of elite killers called Devil Dogs attempt to extract him and John is forced to intervene. Anyone else thinking of cake right about now? They have gotten themselves roped into a diamond smuggling ring and things take a bad turn when John ends up trapped in a room with RJ strapped to a bomb.
Carter turns to Elias for help, not telling her boys where she’s getting her information. With a desire to take out HR, Carter is one to watch this season. I am always so conflicted on Elias.

Thanks to Fusco’s bomb skills and Shaw’s expert aim, John is able to get his guy out safely. In a surprise twist, Elias’ number one goon shows up to the party.
I thought “Liberty” was a good season premiere. Not as great as the season 2 premiere which, in my opinion, took the show on a new level entirely. While a notch below that particular episode, this one had a good balance of comedic elements (“It’s a shame to waste a rifle like this on kneecaps”) but all in all, it felt like a middle of the season episode. But still, very good. At a new night and time, I’m hoping Person of Interest continues to dominate in the ratings.

Check out the preview promo for next week’s episode of Person of Interest: “Nothing To Hide.”