It’s been a few hours since the season finale of True Blood aired and I still can’t wrap my mind around what I just saw.

Who didn’t make it to season 7? What other major happenings occurred during a game changing final half hour?

I don’t even know where to begin.

Sookie goes for a walk with Alcide and is surprised to see a bunch of day-walking vampires playing volleyball. At least it reminded us that Tara and Sookie were best friends once. Even Pam hugs her in her fairy blood high. That’s a long cry away from hating Sookie’s precious fairy vagina.

Sookie makes her way back to Fairyland for her impending wedding to Warlow. Only, she doesn’t want to become a vampire. Not just yet. She asks Warlow if they can get to know each other, date, maybe even go bowling. Warlow sighs and turns his beautiful accented mouth to the side..and slaps the crap out of Sookie.

I actually gasped out loud. I was not expecting him to start choking her but I suppose I should have. 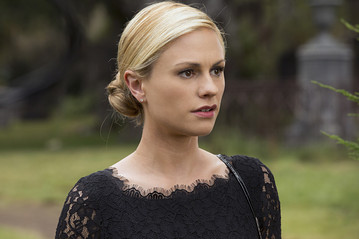 All hell is breaking loose. Pam leaves to find Eric and threatens to release Tara if she tries to stop her. Billith loses his abilities after giving all his blood away and now he’s just regular old “I miss Suckeh” Bill. Yawn. Jessica encourages him to save Sookie from being a vampire.

To do this, Bill recruits Jason, who recruits Adalynn and Andy to help them get to Fairyland. Armed with a ton of weapons, the group marches on in to save Sookie and Bill tries to sacrifice himself. Tries. Unfortunately, Bill gets nothing done and the war heads back to Sookie’s house. Sookie is hiding out in her tub when Warlow finds her. Then, out of nowhere, Grandpa Niall appears through the portal and holds Warlow still long enough for Jason to stake him. Well, that was quick.

You would think this would be a happy time but without Warlow, the day-vampires can’t exist. They all begin to lose their light. This is especially troubling for Eric who is sunbathing on the top of a mountain in Sweden, reading a book.

Surprised by the sudden lack of fairy light, Eric bursts into flames. Yep. But at least we saw peen.

Cut to one hell of a time jump. It’s six months later and things are extremely different in Bon Temps.

Vampires have become a real problem. Infected vampires that is. The Hep V virus has infected 1/8th of the vampire population and they’re wiping out small towns. Sam works with Bill and has asked the town to get blood tested to see if they’re carriers for the virus. But how?

He also wants all the humans to partner up with vampires. In exchange for protection, they would have to feed on their human monogamously.

Tara’s mom wants to reconcile with her and offers to feed her to apologize for being a crappy parent.

The episode ends as the infected vampires stroll up to the party.

Is Eric really dead? We never see Pam again so was she able to save him in time? Is Tara’s mom infected? Did this season finale make you want to tune in for season 7 next year?