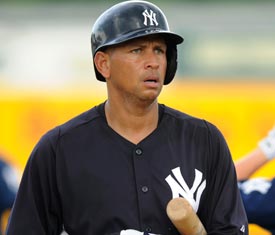 The MLB is done negotiating with Alex Rodriguez. The baseball player has been under fire as of late for his role in the Biogenesis PED scandal. It was announced today that Alex has been suspended, without pay, for the remainder of the 2013 season and the entire 2014 season. AROD is expected to appeal the decision and because of this, may still be able to play with the Yankees in the meantime.

Commissioner Allan H. (Bud) Selig announced today that third baseman Alex Rodriguez of the New York Yankees has been suspended without pay for the remainder of the 2013 Championship Season and Postseason and the entire 2014 Championship Season for violations of the Joint Drug Prevention and Treatment Program and the Basic Agreement.

Rodriguez’s discipline under the Joint Drug Prevention and Treatment Program is based on his use and possession of numerous forms of prohibited performance-enhancing substances, including Testosterone and human Growth Hormone, over the course of multiple years. Rodriguez’s discipline under the Basic Agreement is for attempting to cover-up his violations of the Program by engaging in a course of conduct intended to obstruct and frustrate the Office of the Commissioner’s investigation. The suspension, which will become effective on Thursday, August 8th, will cover 211 Championship Season games and any 2013 Postseason games in which Rodriguez otherwise would have been eligible to play.

Under the terms of the Joint Drug Prevention and Treatment Program, Rodriguez’s suspension will be stayed until the completion of his appeal if Rodriguez files a grievance challenging his discipline.