We recently had the chance to chat with Tara Reid and director Anthony Ferrante about the upcoming new SyFy Original Movie Sharknado. The movie also stars Cassie Scerbo (you guys will recognize her from her work on ABC Family’s great series Make It Or Break It), Ian Ziering, and John Heard.

Check out the interview with Tara and Anthony here:

Up in the sky. It’s a bird. It’s a plane. No, it’s a…shark! A supersized storm sucks sharks from the ocean and hurls them onto land in the new Syfy Original Movie “Sharknado.”

In the movie, regulars of a beachside bar including owner Fin (Ian Ziering,”Beverly Hills 90210″), bartender Nova (Casie Scerbo, “Make It Or Break It”) and local drunk George (John Heard, “Home Alone”) team up with Fin’s ex-wife April (Tara Reid, “Scrubs”) to investigate the ecological nightmare that has sharks swimming through the streets of Los Angeles and falling from the skies. Sharknado is a production of The Asylum.

Q) Can you talk a little bit about your character? How did she get involved with the Sharknado? Does it just land on her or does your character have some sort of expertise in either sharks or tornadoes?

Tara Reid: No, not at all. I mean, it just lands on her. You know, she’s in her house and her ex-husband, played by Ian Zeiring, comes in and says, “Look, there’s going to be a bad storm and there’re sharks everywhere,” and she thinks he’s out of his mind.

She’s like yes, ok, like sharks are flying in Beverly Hills. Are you joking me? And you know, before you know it—boom, there’s a shark through the pool that jumps through and then there are sharks coming everywhere.

It’s just so unreasonable. I mean, what are the chances that there’s really a shark coming out of the street, I mean, though the pools and in the windows and in the sky. It’s so crazy, just the whole concept of it, you know?

So it’s more shocking to her, I think, than anything else but it’s just almost so unbelievable. So, the only response is trying to get away from the sharks and just trying to save her son.

Q) And what’s Anthony Ferrante like as a director?

Tara: He’s great. He has a great sense of humor. He is wonderful to work with. He’s just great. He’s patient. He’s fun. You know, he’s just someone that it is easy to work with. And he’s definitely just a great personality. You know, he’s a team player and he’s a lot of fun and I really enjoyed working with him.

Q) And Mr. Ferrante what’s Ms. Reid like to work with as an actress?

Anthony Ferrante: Tara’s awesome. When she got hired, we started talking about the character and stuff and we were both on the same page as to how this had to play and everything. And we just had a lot of fun with it. You know, we really – everything is about how do you ground this and how do make it interesting.

And, you know, it’s a movie where you have to deal with the spectacle a lot of the film but how can you a least try to weave in these little moments with the characters and try to see how these things are.

And, I mean, there were points where she’s going ah, you know, this line’s got a lot and I go you know exactly right, I agree with you. And she had something perfect to put in its place because, you know, it’s all about trying to make it real because if they – if the actors don’t believe in it then, you know, you don’t have a movie.

And I got to say, you know, I – like said previously, putting these actors in these situations where we were covering them in water and rain and stuff like that, I couldn’t have had a better group of people. I mean, Tara was in the midst of that with everybody and she stuck it out and she was there to the bitter end. And, you know, I see some of the takes sometimes I’m going, “She’s just shivering.” 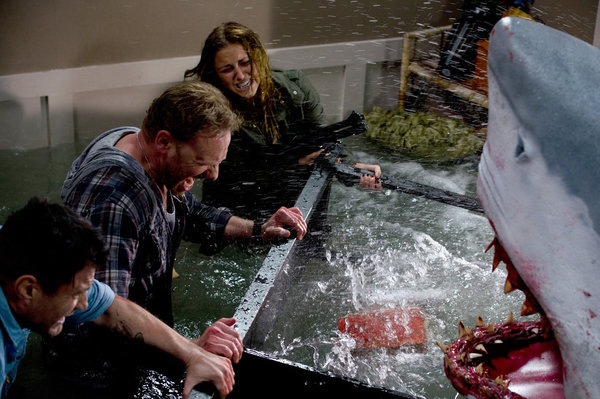 And it’s like, thank you because these are hard films to do, especially in the short amount of time that you have and the amount of stuff that you have to do. And you need everybody on board. And that was what was so great about working with her, she was onboard the entire time for as crazy as this move was.

Q) Tara, how much convincing did it take for you to sign on to this film and do you have any sort of affinity for sharks or any kind of favorite sharks out there—hammerheads, anything like that?

Tara: No, I hate sharks, personally, to be honest with you. When I read the script, I actually thought the concept was so ridiculous that it was almost so bad that it was good. Do you know what I mean? I mean, sharks flying in the sky. I mean, come on, this whole thing is so unrealistic.

I think that’s kind of how the character takes it. Like, you know, when her ex-husband shows up to her house and says, “Come on, you got to get out. There are sharks everywhere. Sharks flying in Beverly Hills.” Like, “What are you talking about??” You know, you’re on something.

And all of a sudden—boom, she’s seeing the sharks, like, flying through the sky and like in her pool and jumping through stain glass doors. It’s like, what the hell. It’s so out there. You know what I mean but it’s actually funny. You know, like, it’s just so crazy. I mean, I think it’s one of these films that people are going to watch and just really, really laugh and enjoy it and watch the comedy in it.

Q) What is your favorite moment from filming this movie?

Tara: The whole movie was an actual, fun movie. It was fun to make, you just had to have a crazy imagination. And just the whole concept of sharks flying in the sky, in Beverly Hills—it’s just crazy.

So you just had to have this imagination and have fun with it. And I think when you watch the film, you know, I think more of a comedy. You’re going to watch it and you’re going to laugh and it’s funny. We had a really good time making it. It was a fun film.

Anthony: I think there were a lot of fun moments. You take away with the saying that these things are very hard to do and that there’s a lot of stress involved. But the fact is you get to play and I don’t know anybody that could say they get to play every day on a set.

Like, this is fun and even though it was freezing cold while shooting that scene in that living room, where we decided to build a set in the swimming pool and then submerge the set. That was just crazy because you’re getting to do these big-budget things on a little budget. But the other thing, too, is just some of the acting moments.

There was bar scene, too, where we introduced all the characters and we spent an hour and a half watching and reversing that to kind of make it feel natural. And I love those moments; I love when the actors suddenly do something in character that isn’t expected—it’s fun and it’s real. And I think that’s kind of the neat part about doing these movies, too.

So there were a lot of fun moments that we had. But, it was a crazy movie. Like Tara said, it’s sharks in a tornado. You got to either embrace it—as we would say, you got to embrace the ‘nado—or you’re not with it. We were all with it.

Q) Can you describe the premise a little more. I mean, obviously it’s a tornado with sharks in it, but how do the sharks wind in one place long enough to strategize killing anybody? Does the neighborhood flood?

I mean, how is it that the sharks don’t get plunked out of the tornado and just die from lack of water?

Anthony: There is a trajectory. We set up the scene that on the coast of Mexico, a group of sharks get sucked into a tornado. They get deposited onto our coast and then it slowly progresses where it starts to flood, the sharks start coming up from the sewage lines, and then through the storm. Then it builds to the full on Sharknado.

I think if you start looking at how this works or how this doesn’t work, you start poking holes in the logic… and you just kind of have to go for it. I think if you watch the movie, it’s clear. The sharks, they’re in it, they get deposited and some of them flop around and they die and that’s what happens.

The story is basically about Ian Zeiring, who owns a bar on the Santa Monica pier. It gets flooded, he goes to save his family—his ex-wife, Tara, his daughter, and his son—and it’s their journey.

And so one thing I’m proud of in the movie is that there’s no military and no scientists trying to figure out. It’s a bunch of everyday, Average Joes trying to sort through this for better or for worse.