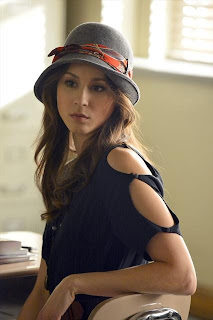 Major spoilers for the season finale of Pretty Little Liars! Find out about the reveal of Red Coat, The A Team, and who didn’t make it out of the episode alive.

Recap of the season finale of Pretty Little Liars: “A dAngerous gAme.”

Let’s start from the beginning of what I can only describe as a incredibly lackluster, almost comical season finale of Pretty Little Liars.

Spencer is home from Radley and the girls are surprised she’s back to her old self. She invites them all to a party her parents are throwing but it’s a trap. Ya know, because she’s on The A Team?

A sends Jenna a text. An address to be exact. It’s the same phone number that “Vivian” gave Mona awhile back. Why would Vivian give Mona Jenna’s number? If you were hoping for an answer to that question in this episode, you’re out of luck. The only reveal about Jenna that we get comes in this next scene.

Jenna sits down at a table and talks to someone. “She misses them.” After tonight, she won’t have to miss them anymore. For one crazy moment I was hoping it was Toby or Ezra or something shocking. But it’s..Shana. Shawna? Yeah. That girl they introduced a few episodes ago is on The A Team. Because that makes all the sense in the world. I guess we’re supposed to take from this that..Jenna is a ..lesbian and Shawna is helping her out for love? What about Garrett? I’m so confused. And apparently Jenna is going blind again.

Remember Pretty Eyes sitting in the diner way back towards the beginning of the show? Apparently it was…Toby! He’s alive! And he sits down at a table with Black Hoody and almost craps his pants when Spencer is looking back at him. He tells her that he was working with A all along to protect her. What a cop out. They spend the rest of the episode making out and doing the deed.

I half expected and hoped that Spencer would kill him after she was done with him. Like a praying mantis.

So at one point in the episode, we see Melissa, Jenna and Shawna in a room together, plotting something. I guess we’re supposed to believe they’re on The A Team. Melissa is a horrible sister. The girls discover that Spencer is working with The A Team but she reveals that she’s only doing it to find out who’s running the show. We all knew this already.

They work together and surprise Mona at the party while Spencer and Toby go off into the woods to wait for Red Coat, who is showing up by a plane because apparently she’s Wonder Woman and can do anything.

Mona, Hanna, Aria and Emily are trapped inside the lodge which is quickly burning to the ground. Spencer tries to find Red Coat in the woods and someone knocks Toby out cold and plants the lighter on him. Before the lights went out, he was following a brunette. My guess is that Melissa or Jenna lured him away so they could set fire to the house becauseee..

Not soon after, someone drags all four girls outside. Hanna opens her eyes and it’s..Alison! In a red coat. Or someone that looks a lot like her. Mona says that all this time she never met Red Coat. She always wore a mask. Please.

Confused and not knowing what the hell is going on, the girls make their way back into town (and apparently leave Toby behind) and they see Wilden’s car. That car is like Christine. It just refuses to die. The tape is still playing.

They open the trunk.

Is it a body? Probably. But the episode ended at that moment so we don’t know who’s inside. Maybe Cece? I was so sure Jason’s body would be revealed tonight since Toby is alive but apparently they’re gonna make me suffer until June. We flashback to Ali’s hand coming out of the ground by the gazebo, only this time, someone is pulling her out.

This episode was a mess. I was most irritated by the lack of Jason closure and the horrible reveal of Shawna. What did you guys think? Who was the body in the woods? Why were Shawna, Jenna and Melissa working with Wilden? Is Ali alive?