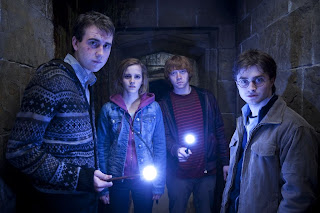 Celebrate today with a little magic! Harry Potter: The Exhibition is back in New York City and fans of the iconic series can now experience the magic like never before. At Discovery Times square and with over 200 props and costumes from the Harry Potter films and set displays, there’s plenty to see for fans of all ages. But hurry! Time is running out to enjoy the thrills of feeling like you’re a part of the magical series. There’s only three weeks left before the exhibition is scheduled to close on April 7th. Get your tickets here!

If you could see or experience anything from the movies, what would you choose?

Harry Potter™: The Exhibition at Discovery Times Square offers fans a first-hand look inside the famous wizard’s magical world and the opportunity to experience the amazing craftsmanship of hundreds of authentic costumes and props from the Harry Potter films.

The following is a list of the Top 20 must-see artifacts in the Exhibition.

Be sure to check back next week for our review of the exhibition and our favorite things to do and favorite displays!