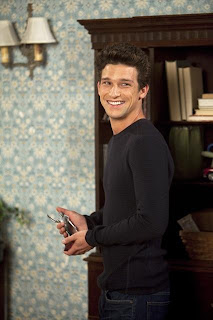 Many of you guys will recognize Daren Kagasoff as Ricky from ABC Family’s The Secret Life of the American Teenager. We recently had the chance to chat with Daren about the upcoming final season of the show. He reveals what he’ll miss most about his time on the series, who he would love to work with some day and of course, what’s next for him once The Secret Life wraps up.

Pop City Life: You’ve had some great guest stars so far in the show. Can we expect any new faces this season?

Daren Kagasoff: A couple. They’re definitely coming in and out as far as new relationships that occur this next season. I can’t really say who, but there’s definitely going to be some familiar faces that you’ve seen from other projects.

Pop City Life: Is there anyone that you would love to work with some day?

Daren:Yes, there’s several. Probably Leonardo DiCaprio, I’d like to work with him.

Pop City Life: With the series coming to an end, what do you think you’ll miss most about your time on the show?

Daren: Probably everybody that I worked with, the crew, the cast, the producers, everybody, because we were doing it for so long, we shot around, I don’t even know the exact number, I want to say 120-something episodes, so when you’re around these people for so long you form relationships, you form friendships, I mean, that’s what I’m going to miss the most, is just missing my cast and being able to talk and be open with them, because these are your best friends.

Also revealed on the conference call:

Q) With the series coming to an end what’s next for you?

Daren: I’m going to be working on this pilot, it’s called Delirium. It’s for the FOX Network. We don’t know if it’s picked up yet. We haven’t even started shooting. But we start very, very soon, and I’m thrilled to be a part of the cast, and that’s basically all I can say.

Q) There are lots of questions left up in the air. Is there anything you can tease us about the series finale and if many of our questions will get answered?

Daren: Many questions will get answered, that’s all pretty much I can say. I know everybody wants Amy and Ricky to end up together, and I guess you guys will see if that happens.

Q) Are you happy with the way the series ended for you and for what the outcome for Ricky is?

Daren: Very happy, very happy. I think the fans will be happy too.

Lots of thanks to Daren for taking the time to answer some questions for us. Make sure you tune in to the final season of The Secret Life of the American Teenager on ABC Family. The season premiere airs March 18th!