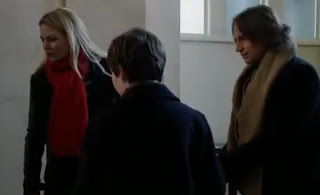 Anyone who knew ahead of time that Mr. Gold, Emma, and Henry venturing off on a trip to the Big Apple (or a green screen meant to look like it) would lead to a great episode, you were right. The episode wasted no time getting right into the suspense, action, and most importantly of all, reveals. Let’s get on with the family reunion shall we?

Check out our recap of tonight’s episode of Once Upon A Time: Manhattan.

I don’t like Milah. I never have. I don’t know why we’re supposed to be sympathetic to her character. She’s just awful. And this episode did nothing to change that. Rumple gets the news that he’ll be fighting in the ogre wars and leaves for battle. While there, he meets a seer who warns him that his actions in the battle will cause his son to be fatherless. Not wanting to abandon his son, and thinking that this news means he’ll be killed, he intentionally breaks his foot so he’ll be sent home. Now we know why he limps.

Milah barely blinks when Rumple comes hom in bandages and tells him she would rather he had died in the battle because now her reputation is ruined. Priorities, woman. And I’m not sure how much of a better parent she is considering she left her son to go off and live with a pirate. Is that brave too?

Emma and Mr. Gold discover Bae’s apartment but he runs away. Emma chases after him and knocks him down. She’s stunned when she realizes she’s looking into the eyes of the love of her life. Neal is Rumple’s son. Neal is Baelfire. He’s Nealfire if you will. Remember that box August showed him to get him to believe? It was a typewriter with one sentence on a piece of paper: I know you’re Baelfire. Well, then.

Emma and Henry’s family tree just got a lot more confusing. Especially for David who apparently isn’t aware that you can have more than one grandpa and now Henry has two. The second of course, being Rumple.

Regina, Cora, and Hook work together to search for Rumple’s dagger. Upon finding the dagger he may be killed and they can harness all of his dark magic. Cora turns on Hook pretty fast and I’m thinking that won’t sit too well with him.

Is Cora playing Regina? Or is Regina playing her?

In other news, I keep forgetting Greg exists. But he does and he’s like an investigative journalist. He sends video of Regina doing magic to “Her.” I hope the reveal of who “Her” is is less obvious than Nealfire.

Not What He Seems

Bae doesn’t really care for what Rumple has to say. He laughs when Rumple offers to make him 14 again so they can start over. His magic is still his crutch. He doesn’t want anything to do with Rumple anymore and is more interested in the revelation he has an 11 year old son.

Many years later when Rumple runs into the seer again, he takes her powers and she warns him that a boy will be his undoing. A boy that is more than he seems. Rumple vows to kill such a boy.

Would you miss Henry?

Once Upon A Time returns in two weeks. Check out the preview of The Queen is Dead here