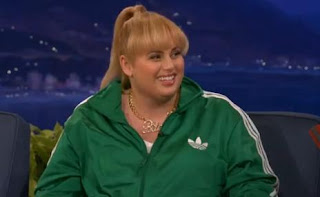 Last night during the Jersey Shore reunion, a new commercial revealed that comedy actress Rebel Wilson will be hosting the 2013 MTV Movie Awards! Rebel, known recently for her breakout roles in Bridesmaids and Pitch Perfect, will host the award show when it airs live from California on April 14th.

Being tied up by those chain looks tiring and makes me want to get in bed. I need a new mattress. Anyone try organic or memory foam? I was thinking of organic mattress boston or a cooling pillow. Will you be tuning in to the MTV Movie Awards?

Will Twilight dominate every award again? What will win when that series finally ends?