Who Went Home on The Challenge: Battle of the Seasons – Season Premiere Recap 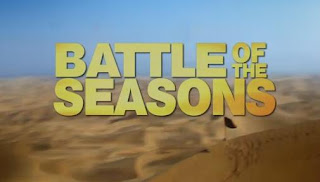 The Challenge returns for yet another season with the ultimate battle. Battle of the Seasons. The teams, who were originally picked to live in a house, are now picked to not kill each other before the end.

Who went home on the first results?

Don’t Cross Me
Teams must distribute weight evenly without falling off beams suspended over water.
Big Easy falls and can’t make it up the ladder.
Preston falls off after making it to the top.
Power Team
Team Fresh Meat comes in last place.
Team Cancun wins the Challenge and decides what team will go into the Arena against Team Fresh Meat.
The Arena
Team Fresh Meat versus Team Austin
Team Cancun decides to give them a game that’s physical over mental/strategy/endurance.
Cara Maria and Eric compete for their team against Lacey and Wes
Hall Brawl
Make it from one end of a narrow hallway by smashing through your opponent.
Lacey loses to Cara Maria.
Eric rings the bell with Wes’s head. The second round needs to be evaluated by a judge to determine the winner.
Eliminated
Wes and Lacey