This episode of Pretty Little Liars served to be, nothing more, than a set up for next week’s season finale: The Betrayal. I really hope it delivers this time. If the betrayal is someone boring like Paige or Nate I’ll kick a baby. Ezra’s baby. Oh yeah, about that…

Right off the bat, the “Previously on Pretty Little Liars” features Ian from season 1 and I’m immediately excited because I miss him. Unfortunately, we get the pastor instead. Remember when Spencer threw the flash drive full of videos at Ian to run away in the church? Well, apparently no one ever cleans in that place because it’s been sitting there the whole time. The pastor guy finds them and brings them to Hanna’s mom because he watched some of it. Gross. Hanna panics because she doesn’t want Jenna to know her mom is bringing them to the police. Her mom tosses them down the garbage disposal anyways so it doesn’t matter.

Oh hey, It’s Ezra’s birthday. He can’t celebrate because he’s worried he ruined Maggie’s life. Aria takes this to mean she should pretend to be someone else and go meet her. She’s doing fine. She’s Alex Mack! She’s happy, healthy, and a successful teacher. Oh, and she has a 7 year old little boy who looks like a Fitz. Aria and Wes worry about whether to tell Ezra he has a son after he calls Maggie and she doesn’t tell him. Maybe he already knows? I want to care but his birthday party is so lame. It literally looks like this, minus the Subway: 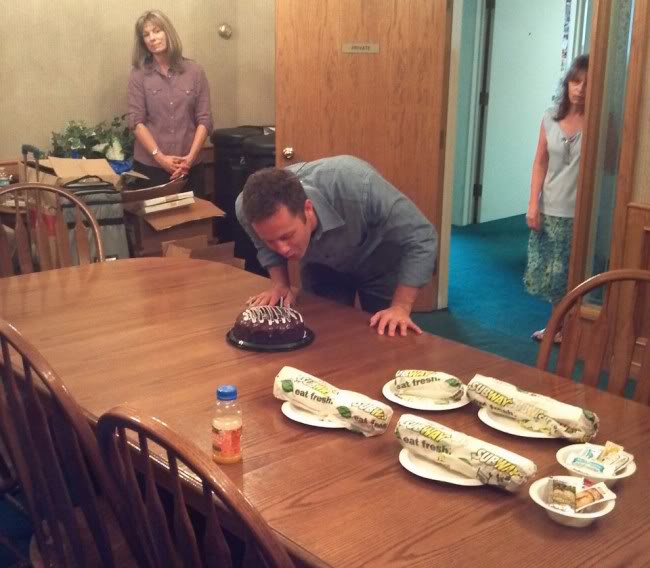 Spencer is in sleuth mode again. This week, Paige is her suspect. Which probably means she’s innocent. Maybe. She is lying about her horrible past with Alison. A flashback shows us that Ali used to torture Paige. She would steal Emily’s stationary and write love letters to Paige before Emily was even out. Then she would blackmail her. Alison was really evil. Is anyone surprised what happened to her?

Spencer’s snooping must have ticked somebody off. Someone locks her in a dressing room and unleashes a snake on her. A SNAKE. A fricken scary snake that is hissing and lunging at her and everything. I would have passed out. Cece finally lets her out and then beats the snake with a wooden leg that just happened to be there. Was it Paige?

Hanna and Spencer certainly think so. They go through Paige’s bag looking for the missing knife of Maya’s and they find the earring that was buried in Alison’s coffin. Why would she have that? Jenna comes by to warn Emily to be very careful of someone she’s hanging around with. Then she gets herself in a taxi and leaves town. Who is she so afraid of?

They want us to think it’s Paige but I’m pretty sure it’s Nate. When he realizes that Jenna was faking being blind, he is not happy. Jenna seems scared of him. Maybe he did something and Jenna saw it? I just don’t trust this kid.

Team A is having a great time though dancing in their black hoodies in a diner somewhere. That’s right. Two of them. Who is it? Who will betray them all next week?