Comic Con 2012: Once Upon A Time Season 2 Spoilers 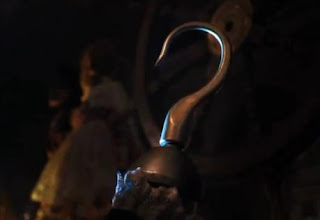 Ginnifer Goodwin, Josh Dallas, Jennifer Morrison, Lana Parilla, Emilie de Ravin, and Meghan Ory are all in attendance at the Once Upon A Time panel at the 2012 Comic Con in San Diego. A bunch of spoilers from the upcoming second season of the show are the talk of the fanbase today and we’re compiling a list of everything so far.

Along with a new title card video featuring three new characters to appear in the second season, a season 2 preview video featured the biggest reveal of all. Call him Hook.

Check out the spoilers and watch the videos here!

The new title cards feature appearances by Mulan, Jack and the Beanstalk, and Aurora (Sleeping Beauty).

We’ll update as the other videos and spoilers emerge! The characters try to find their soul mates with a dating service. Graham has an empty heart! 🙁

Tags: Comic ConOnce Upon A Time
No Comments
Share
0