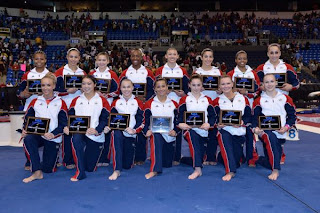 The road to the Olympic games in London just got a little shorter last night after the 2012 Visa Championships. After a stiff competition, the names of the girls still in the running for the Olympic team were announced. The members of the senior women’s national team will go on to compete in the 2012 U.S. Olympic Trials, June 28-July 1. Sporting some familiar faces from the 2008 Olympics and some new favorites, who are you hoping makes it to London?

Update: See who made the 2012 Olympic Teams here

U.S. Senior Women’s National Team
All will advance to the 2012 U.S. Olympic Trials

McKayla Maroney was petitioned onto the team following a scary injury during yesterday’s practice. She suffered a concussion but as far as we know, is otherwise okay. After Shawn Johnson announced her retirement from the sport, I’m excited to see if Nastia Liukin can pull it off again. I also really like Bridget Sloan and would love to see Alicia Sacramone redeem herself.