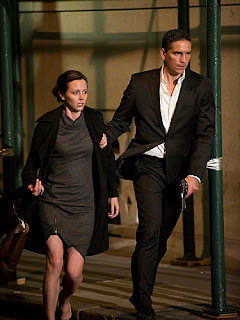 The season finale of Person of Interest, Firewall, definitely lived up to the hype. The episode was intense, action packed, and had me on the edge of my seat right up until the final moments. A Prettier-Than-Fusco psychologist is the Person of Interest this week. I like her immediately because she can read Reese like a book and I can tell it rattles him. Has he finally met his match?

They discover Caroline is being threatened by one of her clients who may have hired HR to take her out. Reese grabs her before she is shot and they both hide out in the honeymoon suite of a nearby hotel. I wouldn’t mind hiding out there with him one bit. Unfortunately, they’re in one of the most surveilled spots in the country so they’re practically stuck. Not only are the dirty HR cops closing in on them, but the FBI has caught them on surveillance and are also swooping in on the hotel.

Finch asks both Carter and Zoe for help. Zoe and her gorgeous legs set out to investigate before anything happens to John but the FBI snags Carter before she can leave the building. She panics and texts John help every time the FBI gets close. John and Caroline get themselves in quite a pickle when HR and FBI enter the building at the same time. Thankfully, Finch has one or two tricks left up his sleeve. Finch cuts out all the cell phone towers in the area so none of the bad guys can communicate. I love that man.

John sends Caroline outside to safety and he stays behind to shoot some kneecaps and blow up the cars of the dirty cops. Back at the FBI pow wow, Carter believes Fusco is the mole and demands to know what he’s up to. You can imagine her surprise when she learns both she and him are working with the gorgeous man in the suit. They pick him up and he defends himself by offering to buy them some drinks. Gotta love him.

I’m a little uneasy at this point. It’s a season finale and John doesn’t even have a scratch on him. Usually he’s in mortal peril by now. Remember the mid-season finale? He was basically dying in the arms of Finch. I was so sure the FBI was going to catch him and that would be the finale cliffhanger.

I was not prepared for what happened next.

Alicia has been following Finch and manages to break into Finch and Reese’s library hideout and she realizes what they’ve been up to. Finch is in his car waiting to pick up John and Caroline and is shocked when Alicia and a rather large gun enter the car instead. She cries and cries that the Machine killed Nathan and they should destroy it. Finch argues that horrible people they thought they could trust are what harmed him and not the Machine. Before he can get any further, Alicia is shot and another woman gets in the car.

At first glance, I thought it was Stanton. I make the Home Alone hands-on-my-face reaction when I realize it’s Caroline. As Zoe is going through her computer, we realize that Caroline is Root. And she knows all about Finch. What is she going to do to him? Someone save Finch!

My heart breaks a tad when John goes to the library and it’s a lonely, empty place without his buddy. He walks through the streets of New York and turns to a security camera. He addresses the Machine. He needs its help to save Harold. Then, a phone rings.

What?? Who is on the other end of that line? Is it Nathan? Is it someone we haven’t met yet? Is it The Machine giving him a clue? September can’t get here fast enough.

Besides all the bad-ass moments, my favorite parts of the episodes are always the one liners:

Finch: Where have you been?
John: Corrupting Fusco.
Finch: We have a new number.
John: She’s a lot prettier than Fusco.

Caroline: This must be what panic feels like.
John: Here, have some chocolate.
Caroline: Will this release an adrenaline response?
John: No, but it tastes good.