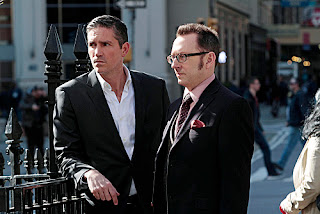 With season one coming to a close, the time has come to learn more about Finch’s past with his partner in crime Nathan and how the Machine came to be. I knew this before I watched and I was super excited to learn anything they would give us. I’ve had my theories for awhile and this episode definitely put some of those into play. It also closed a few.

This week’s Person of Interest (guest star Jacob Pitts) hits close to him for Finch. He’s involved in a government conspiracy and he doesn’t even know it. Henry works in a secret undercover government building and he’s asking all the wrong questions. Those questions just so happen to be about the Machine. He has long suspected its existence and now they want to kill him over it. Reese does his best to save him but the guy keeps running off. John even gets his ass kicked by like, Chuck Norris or something. It’s a rare sight.

How many people know about the Machine now? In flashbacks, it was only a handful. One of them was Alicia. Last we saw her, she was terrified of Finch and had gone into hiding. Now, she’s calling Henry and telling him to run. Instead of running, he breaks into the government building to steal evidence of the Machine. He gets himself arrested and tries to go to the press about it. This guy is a fool. Bring on the grenade launchers and car explosions.

Finch shows up to talk to him instead. He gives him a new identity and a few solid answers about the Machine so he can go on living his life. Then, in a shocking move very un-Finch like, he admits to building the Machine. Unfortunately, Alicia is a few tables over listening in. Uhoh! Does she know he’s alive now? Finch tells Henry to avoid mysteries because the biggest one out there is The Human Heart.

I’ve long thought Finch had been heartbroken in the past and, to be honest, I thought he was in love with his partner in crime, Nathan. Maybe I just watched too many LOST episodes and loved them together. I don’t know. When we get more flashbacks of Nathan worrying about Finch’s lack of contact with other people, he tells him he may have already found love. Yes, part of me wanted to say “each other.”

Turns out Nathan had second thoughts about giving the Machine to the government. (Ya think??) What if they were to abuse it? Shouldn’t they have a backup plan? Finch tells him such worries are unnecessary and dangerous. Nathan creates one anyway. Will this lead to his death? When asked the same question by Reese, Harold tells him he has one. What is it?

John begins to follow Finch again to try and learn what he’s hiding. I hate that there’s a lack of trust between them because their cute moments are my favorite part of the show. Like in this episode when Finch makes a face for John to relinquish his chair. So cute. And ya know, he’s a billionaire. Why can’t he invest in a second chair? John believes he is finally successful in finding Harold’s home but no one is more shocked than I am by who opens the door.

Carrie Preston! AKA Michael Emerson’s wife. I almost screamed when I saw her. Better than that, she says that Harold is her fiance. Well, there goes my Nathan and Finch theory. But it’s too cute so I’m not too disappointed. She tells John that she lost him to an accident awhile ago. She is one of the many who believe he’s dead. Finch tells Reese it was necessary to keep her out of danger.

I thought this was a great episode. We finally got to learn about Harold’s past. He is one half of an adorable couple. I wonder what the season finale will be? Will John finally be captured?

Watch the preview of the Person of Interest season finale

Tags: No Good DeedPerson of Interest
No Comments
Share
0