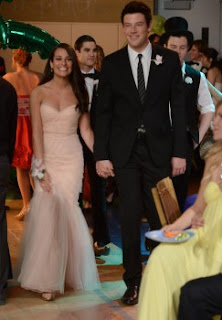 This episode was all over the place. On one hand, we have the intense battle for Prom King and Queen (which apparently defines one’s entire high school career and life) and then we have an entire sub plot devoted to Blaine’s angst over not being allowed to use hair gel. And then we have Rachel, still mourning the loss of her dream and acting like her life is over. I’m having a hard time understanding this. Can she not get her boring classes out of the way and reapply next year? Can she not apply to any of the other fabulous performing arts schools? New York is a land of opportunity for someone like her. Or ya know, anywhere else. She’s so young.

Brittany is a crappy school president so Figgins asks her to get more involved. In her mind, this translates to making the prom dinosaur themed and bans hair gel. I love dinosaurs. But I’m so over Brittany. She’s not even close to being funny anymore. And neither is Becky anymore. She’s just being mean at this point. But she gives me my favorite scene of the night. More on that later.

Up for Prom King we have Finn, that hockey player with a mullet, and for some reason, Brittany. Prom Queen candidates are Quinn, Santana, and some other random girl I’ve forgotten. Quinn asks Finn to campaign with her and Rachel is pissed and jealous. Finn, rightfully, calls her selfish so she goes to mope in the auditorium with Klaine while singing Big Girls Don’t Cry. URGH. She then comes up with the idea to have an Anti-Prom party in a hotel room with her friends. Santana flips a lid and calls her petty and tells her off in front of everyone for trying to ruin one of the last nights they’ll have together.

A depressed and not graduating Puck shows up to the party along with Becky, Klaine, and..yeah that’s it. Becky goes to Sue because she’s upset about not being nominated for Prom Queen. Sue tells her it’s because Quinn snagged the sympathy vote and bluntly, because she’s a bitch. Harsh Tai. But not untrue in this episode. I’m pretty sure I heard her make fun of Rachel’s nose. When Finn turns up to take Rachel to the prom anyway, Puck and Becky are left alone to play strip poker. I appreciate this scene because Mark Salling is in his underwear, and also because it’s really sweet when Puck offers to carve Becky a cardboard crown and take her to prom. He gets to spike the punch! Continuity!

They walk in and Brittany is singing another Ke$ha song and it’s not something I ever want to see again. But then Santana sings Love You Like A Love Song and it’s better. But then a slew of the boys get up and sing One Direction. Nooo! I don’t want to like this song! Finn goes to find Quinn in the bathroom and walks in on her standing. STANDING. Already? Quickest heal ever. She’s been milking her lack of legwork for the sympathy votes. Finn is furious she would put her friends through that and ends up trying to physically pull her out of her chair in the middle of the dance floor. Let’s not go crazy here Finn. She’s probably still wobbly. Sue calls Joe “Jar Jar Binks” and it’s rather accurate.

We then get some weird, unnecessary scene about how Blaine is brave for showing up without hair gel. Like. Really? His fro isn’t even that bad! Remember how he looked before Glee? Rachel apologizes to Quinn and gives her some speech about how much she means to her. Santana breaks up the lovefest to go count the votes with Quinn. Turns out Quinn really did get the sympathy vote. She won Prom Queen.

However, when Finn is called on stage to win Prom King, Figgins announces that Rachel has won Queen. Anarchy! Quinn rigs the vote for her friend. She then has her moment and grabs the mic stand to help her stand while they all sing Take My Breath Away.

Watch the preview of next week’s 2 hour episode here