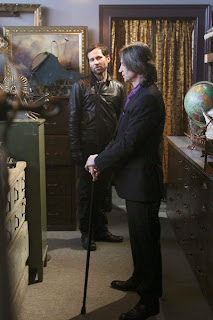 Are you ready to find out about August? If that’s his real name. Dude’s kind of a liar. He wants something from Mr. Gold and Mr. Gold knows it. So what’s the deal? We already know Mr. Gold is quite the thinker. He always has a plan. Will August throw him for a loop?

Kathryn tells Emma that she was drugged and kept in a basement somewhere. Regina is pissed about this because she feels Mr. Gold broke their deal. She wanted Kathryn killed so that Mary would be framed. She is such a nice woman. Mr. Gold obviously found a loophole and kept her alive. He lets slip that he created the curse. Why? Does he want Regina to suffer? And if so, why?

In Fairy Tale world, Rumple’s son Bae wants him to get rid of his powers. He’s getting more evil by the day and he can’t stand the idea of his father not being the man he loves. Rumply tells his son that the only way to get rid of his power is to be killed by the sword. Obviously not wanting that, Bae makes a deal with his papa. If he can find a way to end his powers so they can be together, he has to agree. They even shake on it. We all know this isn’t going to end well.

Mr. Gold is uneasy because August has a picture of the same sword in his apartment. He believes that he is there to kill him. He goes to Archie to talk about it and believes that August is his son. His very angry son. And why is he angry? Bae gets help from the Blue Fairy who gives him a magic bean. The bean will take him and his papa out of this world and into another where magic doesn’t exist.

When Bae opens the portal, Rumple gets frightened and doesn’t want to go. The tornado portal sucks his son in without him and he immediately regrets not jumping in. He screams for his long lost son but the fairy tells him its no use. She tells him only a powerful curse could help him now. Rumple vows to take all the time in the world to create such a curse to get his son back.

Mr. Gold goes to confront August and tells him he knows who he is and knows what he wants. August agrees it’s time to stop all the lying and admits he is his son. Stop all the lying eh? I see what you did there, Pinochs. Mr. Gold cries and begs his son for forgiveness and they hug and it’s all rather sad and adorable. I want to give him a hug too. It’s such an attractive huggle sandwich. He helps August find the knife so they can destroy it together.

August holds the knife and attempts to use it to control Mr. Gold. Shocked by this turn of events, Mr. Gold realizes that August is not his son after all. His son knows all about the knife and August clearly, does not. He lied. What a liar he is. With a knife to his throat, August tells Mr. Gold that he’s sick and dying and needs help. He says he’s been trying to get Emma to believe. Why? How will that cure him? Mr. Gold decides to let him go and tells him to keep trying at Emma. If he succeeds, they’ll both get something out of it.

Back in the police station, Regina forces Sidney to confess to the abduction of Kathryn. Emma knows it’s a load of crap and Regina is just trying to cover her ass. Emma is sick and tired of this sociopath running the town. She threatens to make it her mission to get Henry back.

I don’t really care about her son anymore. I care about Rumply’s son. If he isn’t August..where is he?