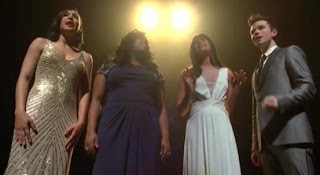 Quinn gets a tingling sensation…in her heart | Last week’s Glee found Quinn spending increased quality time with both Artie and recent New Directions addition Joe (The Glee Project‘s Samuel Larsen). In this week’s episode, one of those suitors turns up the heat (with adorable/awkward results) in an unexpected venue: During a trip to the physical therapist. Plus, Brittany gets to hilariously weigh in on the new kid’s appeal: “Joe’s really pretty, but I heard she doesn’t shave her armpits.”
Schue and Emma seek professional help | Even in Northwest Ohio, finding somebody to plan your nuptials doesn’t come cheap, but thanks to a healthy tax return and the sale of some blood platelets, Will manages to secure the services of the “Northwest Ohio’s premiere wedding planner.” Ultimately, though, when one half of the engaged couple clashes with the in-demand Mr. Lavender, concerns bigger and more serious than color schemes and reception favors bubble to the surface, leading to a particularly nice scene for Jayma Mays.
One couple suffers a bout of “Lesbian Bed Death” | Wait, two randy teenagers who haven’t had an unscheduled makeout session in a month? Sounds like a case for one of Ms. Pillsbury’s trademark pamphlets. Or, on second thought, maybe not?
Mr. Hummel returns from Washington | Glee is always a little better when the fantasic Mike O’Malley is in the mix, and this week the newly elected Congressman takes time from his busy schedule for a touching one-on-one with son Kurt featuring this fabulous little zinger: “I was 9. Who knew paella was gonna be so complicated?”
Frenemies make beautiful music together | Rachel and Santana team up for a spin on “So Emotional” that’s so sensational, I’m not sure why Mr. Schue doesn’t immediately add it to the set list for Nationals. Perhaps just as interesting, though, the new musical alliance leads to two out of the following three things coming true: public displays of affection; class photos hung in each others’ lockers; and eventual accusations of stalking.
Kurt’s fashion sense leads to serious relationship woes for Klaine | No, it’s not that Blaine doesn’t appreciate things like Kurt’s hippo-head brooch, it’s just that Porcelain’s outre accessories happen to catch the eye of a certain someone else. And that someone else happens to be pretty handy with text-message compliments. You see where this is heading, right?
Major musical moments galore | From Whitney’s early hits (“I Wanna Dance With Somebody,” a stunning a capella “How Will I Know“) to her later chart-toppers (“It’s Not Right, But It’s Okay,” “My Love Is Your Love”) the hour is packed with music from a variety of New Directions members, and there’s not a weak link to be found.