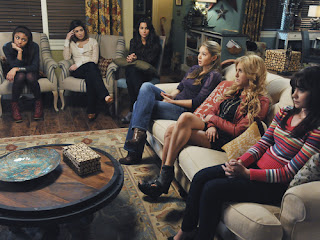 Just when Payson is excited about the possibility of a boyfriend and a new start at the training center, she gets knocked back down. During an interview, the infamous kiss with Sasha is brought up. Will she ever live that down? KP is wondering what’s going on but I don’t think the girls recognized her with her new hairdo. She’s so cute!

Marcus is back on behalf of the rest of the NGO. They’re snooping around to check up on Coach Mac and his coaching techniques. These techniques so far are..well, they wouldn’t medal. The girls think he’s a bully and all he does is yell and criticize them. A compliment would go a long way. Payson makes the decision to go to Marcus when the girls talk about how worried they are about the team. Marcus tells Coach he was 48 hours to make an effort with the team or he’s out.

Jordan is still making me wish someone would punch her in the face when she tries to get everyone to hate Kaylie. Lauren is noticing how much closer she’s getting to KP. She herself is bonding with Payson over boys. That’s not going to last much longer. Kaylie and KP do some digging about who originally sent the video of Payson and Sasha to Ellen Beals. Boy is Kelly shocked when she gets word it was Lauren. Unfortunately, Jordan overhears the whole thing. This is not going to be pretty.

Coach Mac calls a dinner meeting at his house for the girls to try to get through to them. He’s still treating them like the boys. No one wants to watch Remember the Titans. When he leaves the room, the fireworks start. Jordan is suchhh a bitch. She basically forces the girls to reveal to Payson in front of everyone that Lauren betrayed her. Poor Payson. I hate seeing her cry. The girls have it out and it’s not as explosive as I was hoping.

The team and the Coach finally tell how they’re really feeling about the team and start to understand each other a little bit better. The next day, he’s complimenting the girls and it’s like looking at a totally different coach. In better news, Payson gets a kiss that isn’t from Sasha! Personally, I’d prefer Sasha. As far as Payson and Lauren go, they’re not BFFs again yet but they will be. They agree to start over by going to see a doctor secretly for Lauren’s mysterious illness. What’s wrong with Lauren?

Tags: Make It Or Break ItTime is of the Essence
No Comments
Share
0