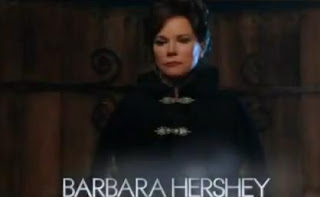 Flashback time! Who wants to see Regina before she was evil and as a young woman in love? This episode is for you. Young Regina loves to ride her horse and she loves her father. Her mother on the other hand, is quite a treat. She’s mean, critical, and can do magic. What a dangerous combination.

Regina deals with her mother by running to be with Daniel, the stable boy. They’re in love! Unfortunately, they have to hide it. On one of their secret outings, Regina notices a young girl that needs to be rescued from an out of control horse. It’s little Snow White! The actress playing her has really got Ginnifer’s mannerisms down. It’s so weird to see Regina and Snow hugging. Methinks this friendship, and Daniel’s life, aren’t long for this world.

Back in Storybrooke, Emma continues to work with others to prove Mary’s innocence. After last week, I’m having trouble figuring out whose side Mr. Gold is on. His own? In another twist, King George is the DA. That guy is everywhere. After Mary has a disastrous interview with him, Emma goes with August to the scene of the crime to look for clues. And she finds one. A shard of metal broken off from a shovel is found in the hole the heart was in. The two of them match it up to a shovel in Regina’s garage. When Emma returns the next day with a search warrant, she’s shocked to see Regina has a spiffy new shovel. How did she know?

Emma accuses August of betraying her. He’s adamant he’s not a liar. Couple that with his funny walk and the guy is looking a little like Pinocchio this week. Mary is crying to herself in her cell when Regina comes to laugh at her tears. She finds the oddest things amusing. And boy, does she love seeing Mary suffer. She tells her she knows that she’s innocent but she’s still happy. She knows that Mary deserves to suffer. Yikes! That’s cold.

Ewww alert. Snow’s father, the King, shows up to express his gratitude that Regina (she’s also Regina in Fairy Tale world!) saved his daughter. Then he proposes. Gross. That’s quite an age difference considering they’ve known each other for 30 seconds. Regina’s mother is thrilled. Regina..not so much. She goes to meet Daniel and kisses him, asking him to marry her so they can run away together. He gives her a ring and they start to make plans. Snow walks in and sees them. Regina begs her to keep it a secret because what they have is true love.

Poor little Snow. She’s so young and foolish. She is easily manipulated by Regina’s mother who weasels Regina’s plans out of her. Not wanting Regina to lose her mother, Snow tells her the truth. Her heart was in the right place but now Regina’s heart is toast. As is Daniel’s. Regina’s mother catches the two lovebirds before they can leave and crushes Daniel’s heart to dust. So that’s where Regina learned that little trick. She tells Regina it’s time for her to be Queen and she’ll thank her later. As she’s getting fitted for her wedding dress, she finds out from Snow that she’s the one who told. And so begins the ice age of Queen Regina.

In Storybrooke, Emma is frustrated inside her office at Mr. Gold’s empty promises to help Mary. That’s when she discovers that Sidney planted a bug inside her office. That worm! She’s apologizing to August when the two are interrupted by Ruby’s scream from the alley behind the diner. They run to see what’s wrong and notice a stirring body on the ground.