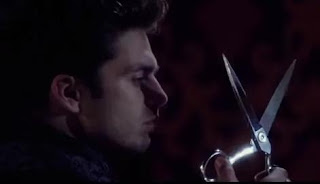 Who’s ready to go to Wonderland? When Mary escapes from jail, Emma rushes to find her before Regina discovers she’s missing. While driving in the rain, Emma literally runs into a mysterious stranger. She offers him a ride home to his fancy mansion where he invites her in for some tea. He thanks her for the ride home by drugging her and tying her up. Guess who is tied up in the back room? Mary! It’s a tea party!

Jefferson AKA The Mad Hatter, is Jefferson in both worlds. He knows who he is, what has happened to him, and how he is suffering from Regina’s curse. He’s consumed with agony, or, you could say, he’s gone mad, looking at his daughter from afar. She doesn’t know about him in Storybrooke and has a new family to give her the great life he never could back home. He knows that Emma is special and desperately wants her to make his magic hat work. What does he think she’s going to do? Even though he’s holding her at gunpoint, I kind of feel sorry for him. Maybe I just really dig his outfit. It’s awesome.

In Fairy Tale world, when he realizes he and his daughter are living in poverty, the Queen gives him an offer he can’t refuse. In exchange for a better life for his daughter, he must take her to Wonderland to get something that was taken from her. I don’t know why the Caterpillar getting high is making me laugh so much. I just wasn’t expecting it I suppose. They go off to see the Queen of Hearts. Or rather, break in.

The Queen takes a box and the two of them run from the guards to leave in time. If they don’t leave together, they don’t leave at all. The magic hat knows that two entered so two people must leave. No more, no less. Regina knows this. She opens the box and out comes her father. What the heck? She screws Jefferson and leaves him behind to have his head cut off by The Queen of Hearts. Bitch! That must have hurt. There, he is imprisoned and driven mad trying to recreate his magic hat so he can leave and find his daughter again.

In a way, Regina kept her word. His daughter has a great life now. It’s just not with him. That’s more of a Rumply move. Emma listens to his story and knocks him out with a telescope. The three of them fight until Mary knocks him out of a window. He disappears when they look out to see if he died. Where did he go? Does this mean the door is open to see his character again? Yay!

Meanwhile, Regina returns to the jail and is shocked to see Mary sitting contently in her cell. She has a talk with Mr. Gold. She’s pissed their plan didn’t work. Why would she want Mary to escape? Why are they working together? I was enjoying Mr. Gold working against Regina with Emma and Mary. I’m kind of disappointed. Emma notices Jefferson’s daughter at Henry’s school and asks to see his story book. Is she starting to believe?