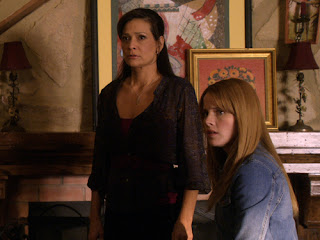 Bay walks in on some heartbreaking news. Daphne and Regina are watching the news and see that a helicopter from Ty’s group crashed and the soldiers inside have been killed. No one knows if Ty is inside and the entire family is on edge waiting for news.

Throughout all of this, Emmett is pissed because he realizes Bay has kept in touch with Ty. Because exchanging emails is basically cheating and a legit reason to be jealous. Can she not have friends that are guys? What is his problem? I’m getting kind of over him lately. He’s so pissy about the whole thing that he drops out of his speech therapy class. What a wiener.

Fortunately, Ty is okay. He wasn’t in the crash. He even calls Bay to let her know. I missed the actor on this show. He’s off playing Lying Games. Bay gives in to her love for Emmett (even though he demands to read the emails she sends Ty) and tells Ty she’s seeing someone else. I didn’t realize he thought she was waiting for him. Part of me wants them to get back together now.

Daphne and Wilkie are also having some trouble. Wilkie has so far refused to learn or take sign language seriously. He’s more interested in making out. Daphne runs into a rude kid at Carlton who enjoys talking down to her for moving on to live a posh life with hearing people. When Daphne gets him fired from his job at the school, she feels guilty and hooks him up with one at John’s car wash. John fires him immediately for flipping off a customer. Daphne goes to visit him at his home and sees his family life pretty much sucks. No one in his family has bothered to learn sign language and basically don’t communicate with him. Will there be a love interest here in the future?

There’s just trouble in paradise all around. Are John and Kathryn next? Am I sensing something between Kathryn and the lawyer? Kathryn learns that Angelo got his information on the hospital from a reliable source. Who is the source?

Tags: Switched at BirthWrite A Lonely Soldier
No Comments
Share
0