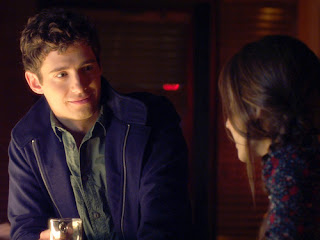 More than a couple familiar faces return this week on Pretty Little Liars. And it’s about to get real. A has a new target to play with. Mona. Mona is now on the receiving end of some good old fashioned A threats and blackmail. A is threatening to turn Mona in for shoplifting unless she turns Hanna and her mom in.

If you recall, back in season 1, Ashley got Hanna out of a shoplifting charge by sleeping with Wilden. If Mona turns the thrown out police report in, A will leave her alone. Mona refuses to do that to Hanna and turns herself in to the cops. Will A leave her alone now?

It seems that the girls are finally opening up to people about A this season. First Caleb and now Mona. It also looks like some parents aren’t too far behind. Ashley finds the A threat with the police report and goes to confront Wilden about it. He vehemently denies he would do something like that that would threaten his job and Ashley realizes someone else has been threatening her daughter. Ella asks Aria about the note A left for Byron in last week’s episode. She remembers that the person who told her about Byron’s affair was also from A. How long before the parents put two and two together?

Paige is also back this week. Where has she been? I guess it’s just good timing now that Maya is off in San Francisco. Maya is ignoring Emily’s phone calls and Emily is upset about where they stand. Paige kisses her but Emily is more offended than anything else. The cops show up at Emily’s door to talk to her about Maya. Gasp. Is she dead?? Or is this a fake cliffhanger and they just want to talk to her about Maya running away?

Ezra is contemplating taking the job offer in New Orleans and whether his relationship with Aria is worth fighting for. Aria’s parents have made it clear they won’t make it easy for him to be with their daughter. They’ve threatened his job and to call the police on him. Ezra seemingly breaks it off with Aria only to have dinner with her like 5 minutes later. Not so sure what that awkward scene cut was. Ella shows up at the apartment to listen and talk to them about their relationship. She doesn’t condone it but she doesn’t want to lose her daughter either.

Melissa is back in town just in time for Spencer to tell her the truth about Jason. She forgot to remind Melissa that she made out with her half brother. My biggest problem with this episode was how obvious they made Melissa in terms of how suspicious she is. I’ve remained adamant that whoever A is revealed to be will be someone we would never suspect. At this point, I feel like everyone has been made to look suspicious. A is obviously Ella.

Okay not really. But is it Melissa? Caleb uncovers more of the video in Alison’s room. Alison isn’t the one that bursts through the door. Melissa is. Is she just looking for Alison because she found out about her and Ian? Or is she a part of the NAT club? The girls are stunned by the latest development and fight over what to do about it. The girls want to turn it into the police immediately but Spencer refuses to believe her sister has anything to do with Ali’s murder.

She begs them to let her talk to Melissa first. Melissa however, looks like she would rather hang out with Garrett. Garrett has been extra creepy this episode by the way. How is he just allowed to harass the girls and follow them. They’re underage. He should lose his badge. Melissa blows off Spencer and leaves with Garrett in his car instead. Wren shows up and lets Spencer know that Garrett has been to one of Melissa’s doctor’s appointments. Spencer then gets drunk and has happy makeout times with Wren. He is sooooo dreamy.

The girls pay off the guy with information on Vivian and instead of giving them a name, he gives them the address he uncovered. He was able to trace the anonymous messages to that address but it is seemingly a dead end. It’s an abandoned house and former law firm. A bum is living inside. Ashley notices the address in Hanna’s room and tells her it’s the law firm that she used in the divorce and that Melissa used to intern there. Melissa finally comes home and tells Spencer she has to tell her something but they have to leave the house to do it. Spencer stupidly leaves her phone and laptop behind as she leaves. Why do I feel like the videos on her computer will be gone by next week?