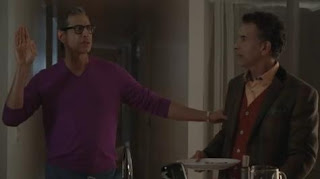 I love Jeff Goldblum. I love Jeff Goldblum on Glee. This has made me incredibly excited for the new episode of Glee. Can Rachel’s parents become recurring characters? Because they are fantastic! I would watch a spin-off of just the two of them having dinner parties. The adult humor brings me back to the days of Glee’s first season. Jeff Goldblum appeared on Jimmy Kimmel last night to promote his appearance as one of Rachel’s dads on Glee. He brought a new clip from the episode with him. Heart airs tonight on FOX!

“Honesty, Respect, Dance.  Those are the foundation of the Berry family!”