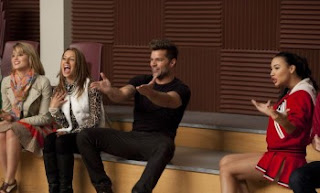 Glee has Spanish fever this week. And by fever, I mean Schue just wants to get tenure. When someone at school complains about his teaching methods and threatens him making tenure, he decides to start taking classes at the local night school to brush up on his Spanish. The teacher? Is Ricky Martin.

Well on Glee he’s David Martinez, but in reality he’s like, the hottest teacher ever.

Dave suggests Schue should have the kids sing Latin music because it would help them learn the language easier than any lesson would. Schue brings him in to show the kids a thing or two. Dave and the kids perform Sexy and I Know It. I hate this song but I love these group performances where it’s so obvious that the cast is having a great time. And Ricky is sooo good looking. It’s the best thing about this episode.

Sue makes a shocking announcement. She wants to become a mother and have a baby. But with whose vagina?? She has frozen her eggs and now she’s looking for the right goods. She hits up some of Glee clubs finest men (ew) but ultimately she wants Will’s. Um. Why? Because of his kindness apparently. Whatever. He obviously says no and she finds someone else. Sue’s tenure is also threatened when a student (Becky) complains about her focus not being on the Cheerios. Coach Roz is brought in to liven up the group a bit and Sue is scared to think she could lose her job to her. I love the two of them as enemies.

In Love news, Rachel tells Mercedes and Kurt that Finn proposed. Predictable, they think she’s nuts. However, they don’t know what they would have done if they were in her shoes. Sam and Mercedes are struggling with their feelings with each other. Mercedes can’t decide where her heart lies (just break up with Shane, how hard is it?). She serenades Sam in the choir room. That’s a hint Mercedes. He returns the favor with a mash-up of Bamboleo and Hero with the rest of the guys. They are wearing the creepiest shoes ever.

Santana duets with Dave with one of the hottest performances to ever grace the stage. The two of them perform a sexy rendition of La Isla Bonita. Santana is showing Schue how it’s done. She challenges him to prove to her that he can do better. He gets on stage dressed as a matador, has Brittany and Mike dressed as bulls, and performs a Spanglish version of A Little Less Conversation. Um. Yeah. She calls him out on it. It’s bad. It’s embarrassing. It’s stereotypical. And he’s a horrible Spanish teacher. Santana was the one who complained about him. In the end, Will moves to teach History and Dave is the new Spanish teacher. Will we be seeing him again? Yay!

I won’t stop till it’s trending.

Basically that entire scene of the football team describing how they clean their kibbles and bits.