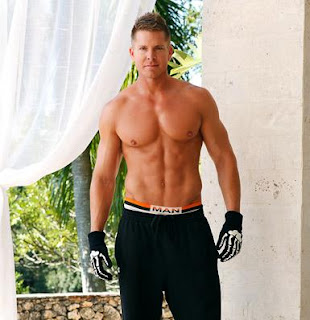 We recently had the honor of interviewing MTV Challenge veteran Mark Long. Fans will remember Mark made his debut on MTV’s Road Rules and continued to prove himself as one of the best competitors seen on The Challenge. We spoke to Mark about what inspired him to come out of retirement for the new season, who he’d like to see back on the show, what’s next for him, and yes, punching the bus.

“I’ve come back to this show to be the oldest, the best in shape, and with the coolest haircut.”

PopCityLife: I wanna thank you for taking the time to answer some questions for us, we’ve been big fans of you and the Challenge for a very long time.

PCL: Yeah! We wanted to ask, you’re sort of coming out of retirement for this one. What made you decide to get back in there and show ’em how it’s done?

Mark: Well, I’ve never done a back to back Challenge. I’ve never wanted to be the guy that wanted to live on these challenges. I wanted to go away for a little while so the fans miss you a little bit. This was just perfect timing. I talked to the producers and I was like “It’s gotta be now because I’m 40.” 40 just sounded like a cool story whereas 41 sounds like “Who’s this loser?” 41 just sounded lame to me. It’s fun. It was just perfect timing. Hopefully it’ll be a fun show for everyone to watch. I’m hoping it will broaden the demographic a little bit, get some older viewers in there.

PCL: Yeah, I don’t care for the new people.

Mark: Well, the problem with the new people is that they just have them over and over. It feels like you’re watching the same show but with different endings. People might get tired of it. Coral would be great to have back on that show and she’s been gone for awhile and she was so popular back in the day. I hope me being back will open the door to have some other older cast members or veterans back.

PCL: Are there any veterans you would like to see back on a Challenge?

Mark: You know who would be awesome to see back? He’s actually my age. Eric Nies would be great on the Challenge. A lot of the younger contestants look to us as an older father/brother type but I never preach to them. Eric would almost preach to them about how they should live their life and they’d probably get so annoyed with him.

PCL: It’d be awesome if he came back with like, the jump rope.

Mark: Yeah! The jump rope. Remember when he bought the jump rope and had it in like every scene?

PCL: I remember when someone stole it.

Mark: Yeah it’s like “Who stole my jump rope?” It was like it was a gold chain. Eric would be awesome to have back. I loved when old school Syrus popped up. You know who hasn’t been on in awhile? I don’t think he’s into it as much because he’s so busy now..remember Ace from Paris? He was always a good time.

PCL: You’re probably better than half of the ones we see every single season anyway.

Mark: I will say this, and I hope it makes the first episode. I said “I’ve come back to this show to be the oldest, the best in shape, and with the coolest haircut.” You can go ahead and quote that. That was my goal. But I’m not like other people that train for the Challenges. I kind of have a routine all year round. I’m in shape at any moment. That’s the problem with me. This has got to be my last challenge. It just has to be because I can’t keep doing this. As easy and fun as they are, It’s gotta be progressive. I’ve gotta be on Survivor or something other than The Challenge. There’s such a generation gap because I just do not enjoy staying up all night drinking wine around the kitchen table.

PCL: Battle of the Exes is a format we haven’t seen before. I was wondering if you had a favorite Challenge format? If you prefer teams or going in there solo?

Mark: You know I loved the Duel 2. As much as I like working with the teams, its just so much less pressure when you know you have to rely on yourself. And for me a lot of this is physical stuff. Like 30% of it is physical and 70% of it is how you’re perceived around the house. It’s a social game and how you get along with everyone. I think when you just have to rely on yourself you know that it’s just you on the line.

Mark: I wish Battle of the Exes was The Duel 3 to be honest with you. But you can’t win them all. I think because Rivals was so popular, the animosity with the teams was so popular so it just worked perfectly with the next one. I do think a Duel 3 is probably coming but unfortunately, I won’t be there.

PCL: Well, maybe you’ll host the reunion or something so we’ll still get to see you.

Mark: Yeah, maybe I can show up for one Challenge as a judge or guest host or something. That’d be cool.

PCL: Kind of like how CT and Tina returned for one Challenge.

Mark: Exactly. I don’t mind doing that. It’s just the daily thing. They’re very strict. We don’t get TV, phones, internet, or anything. So it’s like you’re in jail. We laugh about how we’re competing to stay in jail to make money basically. But it’s fun. You look back on it and remember the fun stuff and not banging your head against the wall thinking it’s the most boring day ever.

PCL: Or punching a bus…

Mark: Or punching a bus. The bus was a great scene wasn’t it?

PCL: Do you have a favorite past Challenge moment?

Mark: Do you want me to go like old school?

Mark: I have a Road Rules favorite moment. I’ll give you two favorite moments. One of my favorite moments is Battle of the Sexes 2. The day before the final I decided with Eric that I was gonna throw the Challenge and let him do a final because he’s never done one. So we did this Challenge and I totally fall off this roof and the girls are celebrating thinking it’s all for real. And on the show they flashback to us plotting and scheming. That was a really cool moment. That was fun. All the challenges are fun. When I was skydiving on the Road Rules that was crazy.

Mark: You know what the funnest moments are? I think a lot of the cast will agree with me. If you have a good room and good people you’re sharing it with, the best times are when it’s late and everyone is in their little bunk beds like they’re 8 years old and just bullshitting and telling stories and laughing so much that we have to tell everyone to shut up so we can go to bed. Those are the best moments. It’s like summer camp.

PCL: What can fans expect from this season? Is it gonna be just as crazy?

Mark: They can expect some really cool Challenges that are really different. They’re not like hopscotch. You can expect a lot of fighting and drama from past couples. There’s a little bit of backstabbing. Everything that makes a Challenge watchable. I think they’re gonna be excited by it. If you put a bunch of kids in a house with a fridge full of alcohol something’s gonna happen. It’s gonna be exciting.

PCL: After this Challenge, what else are you working on?

Mark: I just did a pilot for the History channel. I’m still co-managing Keenan Cahill. This year I’m gonna get back into fitness and hosting. I’m gonna branch out and hopefully try to explore that angle of hosting stuff from a fitness angle from the older fellow.

Mark: Well, good! And I’ll tell you this, the first episode, we’re in speedos.

PCL: Something to look forward to.

We’d like to thank Mark for taking the time to answer some questions for us. It was a great interview and we had a lot of fun with it. It was an honor!  Be sure to check back for our weekly Challenge posts and get updates through our twitter!

You can follow Mark on Twitter here and be sure to watch The Challenge: Battle of the Exes when it premieres Wednesday, January 25th on MTV.