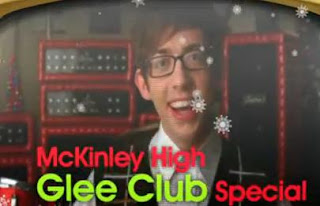 All you want for Christmas is to forget this episode of Glee ever happened. Unless you like unhealthy and unnecessary amounts of Blaine solos then you’ll probably love it.

The episode opens with one of the episode’s better performances. Amber looks amazing and everyone is having a great time decorating the choir room while singing All I Want For Christmas Is You. The kids find themselves in a bit of a pickle when they make commitments to perform at two places on the same night. Nice Sue is back and suddenly all is forgiven because she’s allowed to be nice when she’s thinking about her sister or bullying. Any other time she can push old ladies down the stairs and such.

Sue asks the kids to perform at a homeless shelter for the holidays on the same night that Artie is set to direct the group in a pbs-esque Christmas television special. Artie is the only one with common sense who remembers that Sue has been evil to them every other day of the year and puts his foot down and offers to perform for the homeless another night. Artie directing this thing is all we get to see of him. His song (The Little Drummer Boy) was not included in the episode. Neither was Santana’s Santa Baby.

But hey! Blaine gets three songs! Something for all to enjoy. Also, we get confirmation of why Artie hasn’t used his 100,000 dollar robotic legs since last year. They “broke the next year.” Oh, continuity. Rory is missing his family in Ireland and this will be the first Christmas he spends without them. Can we just say how adorable he is calling his mom “mommy”? He gives one of the other great performances of the night. Blue Christmas. His voice is being used really well. Good things come in small doses Glee. Sam misses his family too and thus, Sorry is born. I now ship Sam and Rory as BFFS. Sorry, Finn.

And then the episode goes downhill and I suddenly for the first time ever, wish I could change the channel and watch The Santa Clause. Rachel and Blaine sing their original Christmas song Extraordinary Merry Christmas and I don’t hate it. But then we get like 4 hours of this terribly unfunny black and white Christmas special parody that just refuses to end. I stopped taking notes at this point. Rory saves the day and goes off Artie’s script and starts reading about the important things like good will to man. He then encourages the group to go back to the homeless shelter to help out.

They perform Do They Know It’s Christmas for the shelter. Because nothing will brighten a holiday for a homeless person like a song with lyrics like “Where the only water flowing is the bitter sting of tears.” Then there’s the inappropriate zoom on the black kid during the Africa lines. I can’t.

Will: They won’t be broadcasting the yule log..
Puck: What the hell?!

Puck: Would it be weird if I made myself a plate?