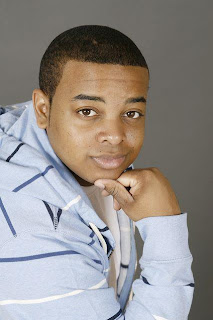 We had the pleasure of interviewing Steven J. Robinson this weekend. Steven is an up and coming actor and drummer. Starting December 1st, you can catch Steven drumming in David Archuleta’s band as part of the My Kind of Christmas tour. We chatted with Steven about his acting goals for the future, what it’s like drumming with David, and we even managed to squeeze a spoiler or two out of him for the upcoming tour. Check it out!

PopCityLife: We hope you had a great holiday this past week. How was your Thanksgiving?

Steven: I had a great holiday, thank you! I spent Thanksgiving with some extended family in Long Beach, Ca-some of which I hadn’t met until then! It was fun!

PCL: You’re about to kick off a highly anticipated tour drumming in the My Kind of Christmas shows with David Archuleta. How’s that new drum kit treating you?

Steven: Correct! I’m one of the many anticipators, if you will! I can’t wait to perform this show, and share the experience with all of you. The new kit sounds and looks INCREDIBLE!! This particular kit is a Yamaha Maple Custom Absolute Noveau, in a Natural Red Pearl finish. (Natural finish laquer with a hint of red shade) Stunning! I’ll be playing Yamaha drums for the whole tour, however this particular kit will make its debut for our first Idaho show. Special thanks to Chris Dolson, Daryl Anderson, and the entire Yamaha drums family for their awesome support! I couldn’t have chosen a better drum kit to play, and company to team with. On that same note, big thanks to Joe Testa and Ben Davies at Vic Firth drumsticks and Dave Levine at Kickport for helping me give 150% at every show. Thanks for being on my team guys!

Steven: Great question. Drumming, and pretty much music overall hit me like a ton of bricks in church, at the age of two. I had a burning curiosity and interest. Most of the abilities came natural, yet there was so much I wanted to learn. I was totally into it, and year after year the passion grew. I loved practicing and perfecting my craft. I was chosen. It was a gift from God.

PCL: What’s the most challenging thing about drumming? One fan would like to know how many sticks you break during a show haha.

Steven: It all depends on the project, as each project can present entirely different challenges. But a common one, especially when I’m playing live, is the physicality. I like to move around quite a bit when I play. I tend to use “high strokes”, while playing hard at the same time. All of that can put stresses on my hands, arms, feet, and back. This is why I give those areas a good stretch before I play.

Ha ha Well again, it all depends on the show, and how hard I’m hitting. With David, on average during the Asia tour, I would break one stick a show-because I tend to hit harder playing David’s shows. In other projects, my sticks last as long as they can take the beating! Ha ha

PCL: How are rehearsals for the tour going? What’s it like working with David?

Steven: Rehearsals are great! Every time we meet, the show content gets tighter and tighter. We have a couple more before the first show.

Working with David is super cool. I’ve said it before- It’s a pleasure working with an artist who is as adamant about putting on a great show, as he is talented- without the ego and superstar attitude. He’s down to earth, and we (the band) treat him like he’s one of the homies! We’ll go out, have lunch/dinner, and it’s a good hang! We’ve become friends.

PCL: What can fans expect from this tour?

Steven: The music, music, music, baby! This show is the most musical show I’ve played in, besides theater productions. It’s not just a pop concert, we have something for EVERYBODY!

PCL: Okay, Steven. We gotta ask you for some setlist spoilers. Now, we don’t want you to get fired or anything so we’ll take some vague ones if you got ’em

Steven: ha ha ha Well, the most I can say is that the versatility in genres are mindblowing, and that the Christmas spirit will definitely be felt! This one is one for the books! There is a cool surprise during a very well known Christmas song during the show. I can’t say what the song is, but the genre is rock. 😉

Listen up for it!

PCL: Do you have a favorite song of David’s to play?

I have a few actually! There’s a couple Christmas songs we have re-arranged from the original versions that are so much fun to play. As far as the familiar songs, “Crush” and “Works For Me” are favorites too.

PCL: What city would you say you’re most excited to visit during the tour?

Steven: It’s a tie between the New York cities, and Idaho cities. I love New York, and I’m excited to visit some places I haven’t seen yet. Idaho is a place I rarely hear about, yet alone visit! I cant wait to see it!

PCL: If you have the time, what are you going to do or see in New York?

Steven: Times square all day! I’m dying to see the new Spider Man broadway production, but I doubt we’ll have the extra time for that. Ha ha

(May we suggest, The Big Duck?)

PCL: Do you have any funny stories to share from traveling with David?

Steven: Yes! We were flying from Los Angeles to Hong Kong for a show for Fox network. Usually, we all fly economy for flying shows. Ben Shepherd (bass) and I were jokingly complaining with David about flying economy class for long flights. Ben and I compared seats, and then asked David where he was sitting, assuming he was sitting with us. At this point we were walking through business class. David sheepishly responds, “Oh, I’m in 1A.” (A very nice business class seat by a window!) Needless to say, Ben and I felt pretty stupid! Ha ha!

PCL: What special Christmas memories do you have growing up? Any special traditions or favorite carols? How are you planning on spending Christmas this year?

Steven: The most memorable Christmas would be the Christmas I received my very first set of drums from my father. That was awesome! One tradition I do with my family is watch Christmas movies on Christmas Day-two in particular- “Jingle All The Way” with Arnold Schwarzenegger and Sinbad, and “How The Grinch Stole Christmas” with Jim Carrey. Classic! This year, we’ll keep the traditions going!

PCL: How’s the acting going? Are there any other projects you’re working on?

Steven: My acting career is going great! This year, my agents and management team and I have made great progress. There have been a few bookings and call backs, but nothing brand new in the works until next year. With a busy touring schedule, only so many projects can fit on the plate. After the MKOC Tour, I’ll be switching gears, and focusing on my acting career primarily.

PCL: What would your perfect acting role be?

Steven: Awesome question! As it stands currently, my dream role is a series regular on a television series, or a star role on a sitcom-Comedy or drama. Next year, I’m hitting the pavement hard with this mission!

PCL: We’ve been getting tons of feedback from fans that make us realize there’s a high demand for the band to make an appearance at upcoming meet and greets on the tour. Do you have any plans to meet with fans?

Steven: I am so honored that fans want to meet the band! That is so humbling! However, the meet & greets have never included the band. What we don’t want to do is take focus off of David, as this is his show. The band is usually hanging around during pre/post show activities, so if anyone wants to say hi, just let the present David rep at the meet & greet know, and we’ll be there!

PCL: Is there anything you’d like to say to your fans?

Steven: THANK YOU SO MUCH, AND GOD BLESS YOU ALL! This is only the beginning, and I have just two words to describe the future of Steven J. Robinson…GET READY!!!

We want to thank Steven for taking the time to answer some questions for us. Be sure to follow him on Twitter to keep up to date on what he has coming up!