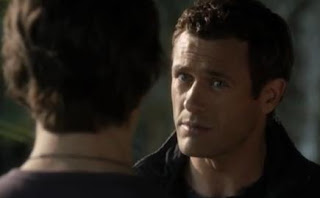 Terra Nova gets back to focusing on the mystery of the show that fans have been craving. I prefer episodes like these and feel more of these would help the ratings instead of monsters of the week. Taylor is focused on locating the spy in the colony that has been feeding information to the Sixers.

Boylan is being kept for interrogation but he’s not getting any answers. Jim has better luck. Boylan leads him to a body that was buried and murdered 5 years ago. The Shannons are stumped because this body didn’t come on any scheduled pilgrimage.

Boyland says Taylor killed the guy and he had to help him bury it. They try to hide the discovery of the body from Taylor but Malcolm snitches. What a weiner. Jim pieces together that the body is that of Taylor’s commanding officer who was probably coming here to relieve Taylor of his duties and make him step down as leader of Terra Nova. Meanwhile, Taylor and Malcolm discover that The Sixers have been using a prehistoric dragon fly to communicate like a carrier pigeon following a sound. They follow the bug back to it’s master and it leads them to Jim’s house.

Taylor arrests Jim and accuses him of being the spy. Jim is pissed that Taylor suspects him for a second and believes he’s actually angry that Jim won’t stop investigating him. Taylor opens up about what really went down between him and his son. His son was working on a way to make the portal a two way street so that the “bad guys” could come destroy Terra Nova. The “people” who sent the commanding officer sent the Sixers. There are “bigger people at play here.” Who?? What does that mean? Taylor made his son leave Terra Nova to fend for himself after he killed the commanding officer before he could kill him. He lets Jim go because he knows he’s not the spy. So who is? And who sent the Sixers? And why?