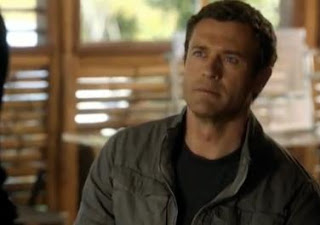 What happens when someone commits murder in Terra Nova? What’s their punishment? You would think that being thrown into the jungle without a gun to fend for yourself would be incentive enough to follow the rules..but someone in Terra Nova can’t be trusted.

A man is killed by a dinosaur while on duty outside of Terra Nova. At first it’s thought to be an innocent dinosaur attack but Jim thinks otherwise. He thinks it was a murder. They investigate and are led to a man who caught his wife having an affair with the man who was killed. He freely confesses to killing him. Jim isn’t satisfied with his confession after talking to his wife and starts to dig a little deeper.

Taylor makes a shocking judgment. It really is like old times here. The entire colony gathers to hear how Taylor is going to punish the suspect. I’m getting vibes of how there used to be public hangings. He reaches his verdict and decides to stick with the bylaws and banish him outside of the walls of Terra Nova. It’s not a popular decision all around. Some would rather he be imprisoned. This is the equivalent of a death sentence.

Taylor is pissed when Jim goes to retrieve the banished man to bring him back when he believes he falsely confessed. Taylor is pretty scary in this episode. They unearth an illegal gambling ring in the bar that Josh works at. Are they really surprised? I mean, really. What else is there to do during the day at Terra Nova? It’s not like there are TVs or tennis courts. They take the untrustworthy owner of the bar in for questioning. Taylor’s hate for this man may be real but his arrest is not. They stage an arrest with the bar owner to catch one of the soldiers who actually committed the crime. Taylor takes him to an empty field somewhere and tries to beat the confession out of him. Then he leaves him without any weapons, food, clothes, or a way to defend himself against dinos.

Josh is digging himself in deeper and deeper. Skye wants to help him get his girlfriend to Terra Nova but thinks Josh working with the bar owner and the Sixers is the wrong way to go about it. She tags along when Josh is sent to see Mira about communicating with 2149. Apparently she has a way that it’s possible. She makes a deal with Josh. She will agree to help him get his girl if he promises to do a favor for her in the future no questions asked. Yeah. That’s not gonna end up being bad at all.

I hate to say it but this episode was kind of slow and felt more like an episode of Law and Order or something. I was more interested in what was happening with The Sixers than anything else. Looks like next week will be much better.