Vote For David Archuleta’s My Kind of Christmas Setlist 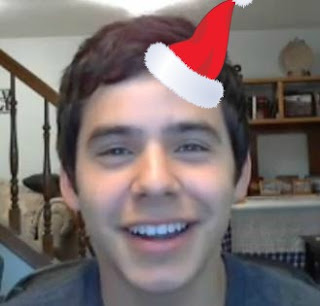 Fans of David Archuleta were thrilled when it was announced he would be embarking on another Christmas tour this December. We’ve still got awhile to go until December so naturally, the only thing to do is create a dream setlist for his tour! A couple of us got together and went over what we’d love to see David perform and it quickly spiraled out of control. We’ve compiled an interesting list and created a poll so cast your votes inside!

What do you want to hear?

Amazing songs that he just has to perform AKA The Ridiculist:

Some of these songs are just so amazing they need to be accompanied with video.

Remember last year when David ended his shows with Feliz Navidad? This song is the perfect ending! Maybe he could even sing in a giant sleigh. Plus, it’s a classic.

We’re including this video because of how ridiculous it is. This may just be a New York thing but every year when this song comes out of nowhere on the radio, you have to stop and listen to the wonder that is Dominic the Donkey.

This song is just hilarious.

Now, I know Mariah Carey’s classic may be an odd choice but have you seen Michael Buble’s version? It’s amazing and something slow and stripped down like this for David could be a show stopper.

And finally, this just needs to happen again. Please and thank you.

Unfortunately, Christmas music is some of the best music and there’s just too much to choose from. So post your thoughts below on what you’d like to see and what we may have missed.

More importantly, cast your vote! You can vote for more than one thing and you can vote once a day.