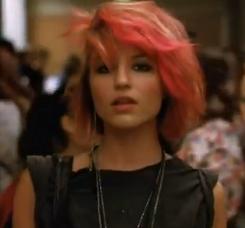 Summer gleecap in 2 minutes or less. Tina and Artie are, as of now, the only juniors we know of that will be staying behind. Sam moved so his dad could get a new job and Mercedes has a new man that she can make wonderful “cocoa babies” with. Lauren peaced out because Glee is bad for her rep and Quinn is off smoking, talking with an embarrassing accent and shopping at Hot Topic. I’m torn about the news that Tina and Artie won’t be graduating with the original cast of the show. I love Kevin and am happy I’ll be able to watch him next year but the idea of this group not staying together doesn’t sit well with me. Quinn’s rebel phase and joining a group called The Skanks is so hilarious to me. She’s prancing down the hall because she’s ~found herself~ and she’s “never going back.” Girl please. This is only going to last like two episodes. Maybe.

With Sam, Quinn and Lauren gone, the glee club needs new members. Schue puts it to the club to work even harder this year to recruit new members. He places purple pianos around the school and they are to perform for the school whenever one is around. They should seriously donate the lavender one to me. It’s so pretty! First performance is a spontaneous cafeteria rendition of We Got The Beat. The performance is so hated by the room that it spawns a food fight. I’m sorry but hot cheerleaders dancing on tables will always create a happy crowd. There’s something wrong with the people in this school. Their luck with new members is in the gutter. Their only prospect is a new girl named Sugar who sounds like a bad American Idol audition. She can say whatever she wants because you know, she has Aspergers. Well OKAY then.

Sue being nice to the club for performing at her sister’s funeral lasted a good 30 hours and now it’s time for her reign of terror. She wants to destroy glee club once again and the purple pianos are the first to go. She takes care of one and enlists her Cheerios captain Santana to take care of the rest. Sue is running for congress and to get votes, her new platform will be to stop wasting taxpayer’s money on music education. She’s made an enemy out of Schue and he dumps a bucket of glitter in her hair. That must have been a bitch to get out.

Kurt wants his boo to transfer to Mckinley so they can be together forever. And wouldn’t you know it, Blaine is just that amazing that he only needs a day to decide to change his life and join Mckinley High. We get to celebrate with a courtyard performance of It’s Not Unusual. I hate that I love this song and performance so much. The red pants and bow tie Blaine is wearing coupled with the fact he’s not wearing any socks is making me rage. There are so many opportunities Artie could run him over. During the performance with the help of Quinn’s cigarette, Santana sets the second purple piano on fire. The rest of the group may not be happy with Blaine joining New Directions to hog all the solos and irritate them with his red pants, they’re even more unhappy with Santana. Schue bans her from the Glee club until further notice.

Rachel and Kurt are still anxious to live the dream in New York City and can’t wait to apply to Juliard. It’s news to them when Emma lets them know that Juliard doesn’t have a musical theater program. She suggests a super competitive New York based school instead. They practice on the school stage together singing Ding Dong The Witch Is Dead. I love them together! Rachel is making Kurt likeable. The two of them head over to a mixer of prospective students hoping to blow them all away. They’re stunned when they walk in and everyone is exactly like them. And hey! There’s Lindsay from The Glee Project! Get it girl! And boy does she. She blows them away belting out Anything You Can Do with Anything Goes. DAMN. Rachel fears that their lack of extra curricular activities is hurting them and proposes that the school put on a production of West Side Story. They end the day performing You Can’t Stop The Beat to celebrate that they will always be making music.

Most Unnecessary WHY moments:

Brittany: There’s pepperoni in my bra.

Santana: Those are your nipples.