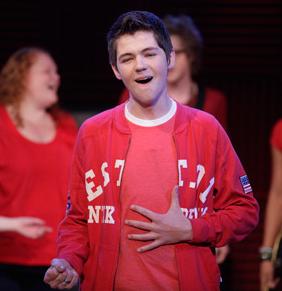 Damian Mcginty does a great interview with Wetpaint where he talks about his accent, Ryan Murphy, how he thinks he would fit in on Glee. If he doesn’t win, I lose all hope for Glee.

In an exclusive interview with Wetpaint Entertainment, 18-year-old Damian McGinty from Derry, Northern Ireland, revealed his struggle to become a TV actor, what kind of character he thinks he would play on Glee, and how he really feels about singing for Ryan

Wetpaint Entertainment: How did you get involved in The Glee Project to begin with?

Damian McGinty: I actually sent my audition in online through MySpace last April 2010. My video got hundreds of thousands of views, and a few months later, Robert Ulrich, who’s the casting director and judge, of course, gave me a ring. He said, ‘Damian, I want you to come in and audition for this new project.’ So December 2010, I flew to L.A. and auditioned for Robert, and then in January, I found out that I had made the top 83, and then from there, it’s just been the same process as everybody. And now I’m top four. It’s ridiculous!

Where have you seen most improvement over the competition?

I came into this competition with probably the most experience out of the 12, but in ways, it worked against me because what I had was a certain type of performance, and that was big. That wasn’t what was needed for television, and I didn’t quite understand that. Hence the struggle in weeks one, two, and three. I had to strip down what I had made of myself in the past four years and build up a new performer whilst saving my ass every week. So I just feel like I’ve improved in every area of performing. I’m still not a good dancer. But I have learned that it’s not about being a good dancer, it’s about putting it across well and selling it.

How do you think your accent has affected you in the competition?

I think actually it’s helped me a lot. Back home, an accent isn’t a big thing because they all sound like me. But over here, I get quite a few comments saying, ‘Wow, I love your accent.’ I got a question before about, ‘how do you feel you would have done in this competition without your accent?’ That’s like saying how would Samuel have done without dreadlocks? How would Lindsay do without her Broadway voice? And Alex without being flamboyant? My accent is a part of the Damian McGinty package, I suppose.

If you were the one to get the seven episodes, would you be an Irish kid? Would you have to fake an American accent?

Have you ever heard my American accent? I don’t think you would make me fake an American accent. You know, the only kind of insight we got was in the bottom three performances, really. What we know is what the people watching know. And that’s the truth. From what I gather, Ian and Ryan said that they’ve always wanted to cast an exchange student. I will be surprised if they took away the Irishness because there’s a lot of material in me being Irish and being on Glee. It could be quite interesting and funny writing.

Have they ever talked about any kind of storylines or what they’d like to do if you were the one?

I think it might have been week five that Ryan said, ‘Damian, I see you coming in as the Irish exchange, and he starts off very lonely, very vulnerable — like you have done in the competition. I can see you growing and becoming a leader of Glee.’ I think he kind of gave a small insight into his thoughts maybe, but apart from that, I have no idea what a potential storyline would be.


What do you think of Ryan Murphy?

I love Ryan Murphy. I really do. I feel like he is very blunt. He would get straight to the point. If you’re not doing well, he would tell you. If you need improve on things, he would tell you. But it’s not a personal attack. He’s saying it to be constructive. As a performer and as a character, we can get better and move in the direction that he wants us to be in. And then, the flip side of that is that when he gives you a compliment, you know it’s for real.  You know you can take that compliment and you can actually be proud of that because he is a man that speaks the truth and speaks what he sees and what he thinks, and I love that about him.

He seems really intimidating and unflappable. He just sits there and looks unimpressed.

Yeah, I remember week one when I sang “Jessie’s Girl,” and I walked out and he was sitting in his beanie hat. And this is a song that I’ve never heard of. And it was week one. I was in the bottom three. I remember just looking at him, and I was just sh****ng myself. It was awful. I’ve never been so intimidated in my life, ever.

What was the hardest part about being on the show?

The hardest part about being on the show was living in that competitive environment for such a long time and not being able to do normal life things. It was very much a Big Brother set‑up. Outside of filming, when we were in the dorms, some people were still in the mindset that this was a competition, and sometimes there might have been a bit of bitching going on. And for me, personally, I’m not that kind of person. I always kind of sat back on my bed and listened to it all. And it was just torture because sometimes it just wasn’t where I wanted to be. But also, the pressure for me, of being in the bottom four or five times. I can’t stress how hard that was. TV is making it look like, ‘he’s just improving every week. He’s getting better. He’s saved himself from the bottom three. He’s performing for Ryan, and Ryan has saved him!’ As a human, it was very tough and it was very straining.  It was certainly one of the hardest challenges ever that I’ve had to face.

It’s funny because I feel like there was an advantage in having sung for Ryan so many times, but it was meant as punishment. They’re saying, ‘You were crap this week.’

Yeah, there is a sense of, the more you see Ryan, the better you get to know him, and the better he gets to know you. In the semifinal, I just felt like I had a connection with Ryan because I saw him so many times.  And I also felt he could relate to me the most because he knew most about me out of the four of us, and maybe Alex. But, I have to say, it may be an advantage in that way, but if I did this again and you said to me, instead of being in the bottom three, five times, you would have been there twice, I would have bit your hand off when I accepted that offer.

Who do you think is your biggest competition?

It’s weird, because there’s something special about everybody, I do believe. Alex for example, I’ve never heard a voice like that in my life. He’s such an inspiration in the fact that he is gay, and his father has passed away, and yet he’s still a battler, and he still fights on. He is the diva of the show. And then there’s Lindsay, who has, in my opinion, the best voice in the final. She has this Broadway massive monster of a voice. And she is very much, as Ryan said, the new possible lead of the show. Samuel is different. He has the rocker style. He is very much unique as in there is nothing like him on Glee, and he has a great voice. And he has been probably the most consistent in the competition, and hasn’t been in the bottom three very often.  And then there’s little old me who has kind of battled his way through, jumped over hurdles, improved and improved.  You know, I feel like I can give it a good crack, and I feel like I’m ready now, more than I ever was.

Do you also feel like it’s really about what character they want to write, not about putting you in pecking order?

We went into this knowing that this wasn’t a singing, acting, or dancing competition, you had to reasonably have all three. I say reasonably because I just can’t dance! But it was obvious they had to cast somebody, an audience would fall in love with, somebody who an audience could relate to. And more importantly, somebody that they could write multiple stories to if they need it. And going in, that was interesting because I knew that in my head.  And I just thought to myself, I remember week one, where the judges said to me, “Damian, we felt that you were hiding this week, so you’re in the bottom three.” I was standing there thinking, you know what? I wasn’t hiding. I was being me. The problem was, everybody else was jumping and fighting for the spotlight. And even though I was in the bottom three, I said to myself, I’m not going to be like that. I’m not going to change who I am. I’m not going to change me as a person. I’m going to be me. And if I give myself a chance of winning this, I’m going to do it my way. And that’s the way I’ve done it, and I’m proud of it.