Chord Overstreet Won’t Be Killed Off Of Glee 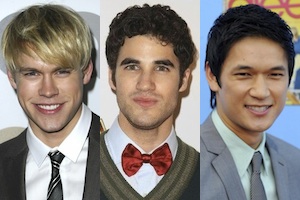 After news broke that Chord Overstreet wouldn’t be returning to Glee next season, many fans were wondering how and why they would be getting rid of the character. Hollywoodlife lets us know Sam will not be killed off. The writers are hoping to leave the opportunity open for him to return for an episode or two.

Why does he have to leave at all? To make room for The Glee Project winner?

Don’t fret Chord fans! Sources tell us Ryan Murphy won’t allow death to be a factor in Chord departure from the show.

News that Chord Overstreet won’t be a series regular on Glee next season shocked and disappointed his fans, who started a “Don’t Cut the Chord” petition to keep him on the show. We spoke to Glee sources to confirm that Chord will have an opportunity to return in the future. “Ryan Murphy and fellow showrunners won’t kill off the character of Sam,” assures our source. “Death is not an option at all.” Phew!So how will Sam’s absence be explained in the new season. “Nothing has been determined yet,” explains the insider. “I know Ryan would like to keep the door open for Sam to return and reprise his role, even if it’s just as a guest star in one or two episodes.”

A second source confirmed it’s “not even in the thoughts of the writers to kill off Sam” and adds that they are also focusing on “making room for the new character that will temporarily join the cast after winning ‘The Glee Project.’”

I was never a huge fan of Sam or anything but I just think this is so unfair to Chord. He already has a fanbase and I can’t fathom why he HAS to be written out of the show. Perhaps the winner of The Glee Project is a white guy with a guitar but still. Wasn’t Chord younger than the rest of the kids? Couldn’t he have stayed at the school anyway once the others graduated?