May 27, 2011 Posted by Noelle Spoilers, Video No Comments 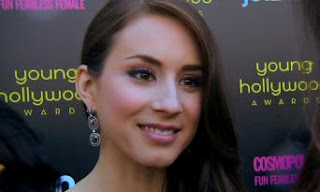 Troian Bellisario tells Hollywoodlife what fans can expect in the upcoming season for Spencer and Toby (Keegan Allen). Their relationship is very much ON! Also, she shares that she now knows some spoilers regarding Ian.

She looks so beautiful!

Check out the video and interview:

“I think it’s true love,” Troian told HollywoodLife.com on May 19 at the Young Hollywood Awards.

“You see them have arguments and try to figure out how to be around each other. Do you kiss when nobody in town wants you near each other?” And yes, they will be exchanging that little four-letter word at some point.

As for which half of Rosewood’s most dangerous couple drops the L-bomb first, Troian tells us, “You’ll just have to wait and find out.”

But Spencer’s relationship with Toby is hardly the only thing on her mind when the show returns. There’s still that little matter of Ian (Ryan Merriman), whose body mysteriously disappeared after his apparent death. Troian says she knows what happens, but the viewers “won’t know for sure for a couple episodes.”

“By the end of the first episode, nothing is as it seems,” she teased. “Everything gets turned around … and the girls are just as confused.”