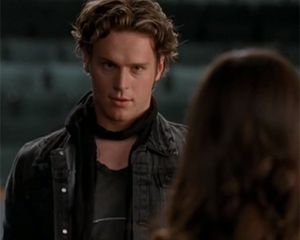 Jesse St. James returns just in time for Prom on the latest episode of Glee!

Mckinley has Prom Fever! The girls are fussing over their dresses and the boys are fussing over their dates. New Directions gets a surprise when Figgins asks them to be the entertainment for the prom when Air Supply cancels on him. Fun! Sue is willing to allow this as long as Schue promises not to repeat some of the club’s worse group numbers. On her list is the Hair/Crazy In Love mashup and Run, Joey, Run. Gasp. How dare you Sue! Run, Joey, Run was flawless! Not everyone is thrilled about prom. Mercedes actually leaves the room after listening to everyone talk about their dates. Poor Mercedes. She opens up to Rachel about not having a date and Rachel proposes that they go to the prom together as friends with Sam. A threeway prom on a budget if you will. Little does Rachel know, but she’s about to get another offer. And it isn’t Finn.

Puck wants to keep his street cred at the dance by spiking the punch. Problem is, Sue has her eye on him anticipating this. Puck asks Artie for help in accomplishing this apparently super important plan. Artie is hesitant. He has other things on his mind. He’s heartbroken over losing Brittany because he called her stupid. With the help of the rest of the guys, Artie rolls in to Brittany’s Home Ec class to serenade her. After Brittany is done pondering how eggs exist, Artie performs Isn’t She Lovely. Half acapella. Be still my heart Kevin Mchale! How could a girl turn that down? But alas. Brittany does and Artie is left rolling out of the room announcing to Puck that he has nothing to live for. OMG. Good Lord Brittany. I would have married him after that. And can I just say, Brittany has been CHEATING on Artie with Santana but SHE is the victim because Artie called her stupid during a fight? Come on now.

Rachel settles in to practice her solo for the Prom with the AV club and begins to sing Rolling In The Deep. It’s entirely acapella and entirely interrupted by one of the best characters ever to appear on this show. Jesse St. James returns entering the auditorium belting out the rest of the song with her. Damn. Now THAT is an entrance. He apologizes to Rachel for everything he’s done to her in the past. He makes it known that his love for her should have been stronger and he was wrong. Then he announces he’s flunked out of college and is willing to accompany Rachel to the prom. Rachel smartly accepts much to Finn’s disgust. The tension between him and Jesse is slowly building to explode.

In other Prom news, Kurt asks Blaine to be his date and surprisingly, Blaine doesn’t want to go. He has a good reason however. After coming out at his old school and attending prom, he was beaten by some other guys at the school. Ugh. Poor Blaine! When Kurt models a kilt that he intends to wear to the dance, Blaine and Burt try to deter him from garnering all the extra attention a skirt is likely to attract. Kurt doesn’t want to hear it. Kurt has quite a problem listening to others in this episode. He’s being walked around school by Santana and Dave so no one will bully him. Things are going well and he’s even bonding with Karofsky. And then we get a scene that made me tear up. Karofsky cries and breaks down to Kurt in the hall apologizing for everything he’s done to him. Ahh! Redemption! Kurt takes this opportunity to try and pressure Dave into coming out. Kurt. That is not how it works!

Prom arrives and there are some interesting fashion choices. Brittany has a tiny top hat on her head, Lauren decided not to show up dressed as a lemon meringue pie and Artie kind of looks like Larry King in a bright red tuxedo. I have to say the award for best outfit goes to Puck. The white jacket looks awesome on him. It was close. Jesse looked like he was wearing blue velvet that only he or Austin Powers could pull off. Artie, Sam and Puck open the dance singing Friday. Yes, that Friday. By Rebecca Black. But Artie is rapping so I guess it’s okay. Rachel belts out Jar of Hearts and it’s almost better than the original. I really love it. What I don’t love is that she’s glaring at Finn during it. The lyrics seem more appropriate to be aimed at Jesse no? The tension between the two finally explodes into the girliest pushing and shoving fight I’ve ever seen and Jesse and Finn are kicked out of the prom.

It’s time for Prom King and Queen to be announced. Surprisingly, Dave is announced as King leading everyone to believe that Santana beat out Quinn for the crown. Figgins opens the envelope and announces to a stunned silence that Kurt had been elected Queen. The look of shock on everyone’s face says it all and Kurt runs out of the room in tears. I gotta hand it to Chris Colfer. That scene was powerful. Quinn runs into the bathroom and bitchslaps Rachel over losing the crown. She’s so upset about it she wants to transfer out of school.  Jesus, Quinn. It’s not that important. It’s just a crown. Girl’s got some problems that will probably never be addressed. Rachel gets over the slap in about two seconds. Biggest scene disappointment of the night.

With the help of Blaine, Kurt scrounges up the courage to walk back in to the gym and get coronated. He takes his crown and announces to the crowd: “Eat your heart out Kate Middleton.” LOL. Amazing. And I begin to love Kurt once again. That is until Dancing Queen starts and he has to have the traditional dance with Dave. Kurt uses this moment to try once again to pressure Dave into coming out to the whole gym. Is he serious? You CANNOT pressure someone to do that. It’s one of the hardest things he’ll ever have to do. The panic and anxiety Dave feels at the suggestion causes him to run out of the room. Kurt gets his first dance with Blaine and everyone joins in.

Jacob: Where does Lauren keep your balls?
Puck:Shut up or I’ll beat your ass.
Jacob: I’m not scared. I’ve been hit by a girl before.

Sue to Jesse: You too Marvelous Marvin!